“Every time we see a person sleeping rough, it is a choice – we can choose to love one another rather than turn a blind eye, we can acknowledge a person’s hardship and think ‘How can I show compassion?’ On this microlevel we all have an opportunity to impact someone’s life.”

Little did good friends Warren Tu and Kim Nguyen realise that a New Year’s Resolution to volunteer with the St. Vincent’s soup vans would be the catalyst for them founding their own organisation. When volunteering, they recognised that while people sleeping rough were given food and water, there was always a shortage of blankets. As the van made its way around the Melbourne CBD, Warren was repeatedly asked for blankets and his heart shattered a little more each time he couldn’t provide one. While it was indeed true that sometimes there were no blankets to give, at other times it fell to Warren to make the difficult decision to instead give the blanket to a person he deemed to be in greater need:

“We shouldn’t be making these decisions that are going to impact someone’s life.”

In 2012, the friends began a fundraiser to collect blankets for every person the soup van serves in a night – serving 300 homeless people meant collecting at least 300 blankets. This fundraiser grew into a charity which operates throughout Victoria and reaches as far as Adelaide and Sydney:

“We’re one of the biggest donors to the soup vans, we also provide blankets for Launch Housing (which does crisis accommodation), Bolt and Clarke (which does medical care), and many other not-for-profits and charities.” 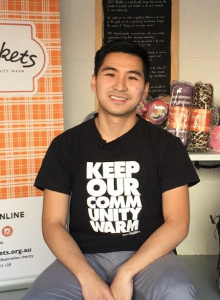 For Warren, 300 Blankets has always aimed to fill in gaps; the mission extends beyond the provision of blankets to the provision of warmth. This has seen the charity’s mission evolve into protecting those who are homelessness or rough sleeping against oft-experienced social isolation by providing an opportunity for human connection and friendship. 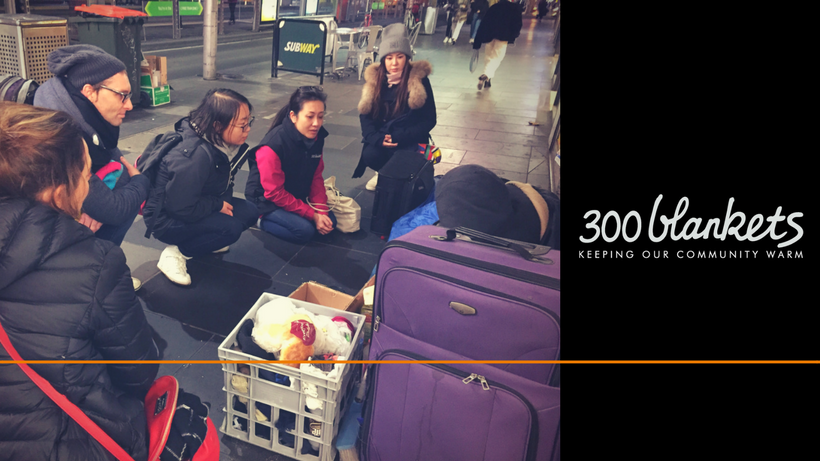 Running since 2015, the outreach branch of 300 Blankets brings teams of volunteers out onto the street at least twice a week to interact and engage those who are sleeping rough, provide people new to the streets with information about where they can access homeless services, and provide material aid such as basic food and toiletries. As approaching someone experiencing homelessness has a certain intimacy, Warren recognises the importance of keeping teams of outreach workers relatively small:

“We’re essentially entering their bedroom and living room, and a small team prevents pedestrians from watching the interaction. The outreach team are privileged to have a 1:1 transaction, we give a part of our heart to everyone we meet.”

As an example of the value of outreach work, Warren tells the story of Sam*, a man sleeping rough outside 7/11 on Elizabeth Street, who had no fixed address after a relationship breakdown while unemployed left him without a house and unable to afford rent.

“He was an amazing guy, really positive, and his personality always showed through his clothing. He stuck a fork in the grout on the wall behind where he stayed and used it as a coat hanger – his clothes were all the colours of the rainbow, and he always accessorised with a quirky hat.

Sam*’s uniqueness drew people to him: “Staff from 7/11 became good friends with him and would sneak out a coffee or bread roll”.

In a not uncommon experience for people living on the streets, Sam became estranged from his family and friends. The people he met through sleeping rough became a type of adopted ‘family’ who encouraged him to not only use drugs but sell them:

“The deterioration in his health was evident week to week, and it broke my heart that he couldn’t escape the addiction.”

Without warning, Sam* disappeared: “… it is bittersweet that we get to build really good relationships with people that have no fixed address or phone number, all you can do is think, ‘I hope he’s OK'”.

After several months, Warren was relieved to meet Sam* once again, now living on Queens Bridge but no longer using drugs. Sam* spoke about his mother in Queensland, and a few weeks later with a smile, he said: “I’ve got in touch with her, I’m going back”.  For Warren, this interaction captures the spirit of 300 Blankets:

“We always aim to be a constant source of hope and a positive influence on someone, witnessing the impact we can make on people’s lives is what drives me to continue this work.”

In 2017, 300 Blankets participated in a Victorian Government study on rough sleeping. A central research question of the report asks,’ why is there such a high number of people sleeping rough in the city?’. It found that the majority of people experiencing homelessness hail from the suburbs or country Victoria  but gravitate to the CBD because of the availability of services. Understandably, the further they travel, the less likely people sleeping rough are to move back to a community they know. The research indicated that the stereotype of an unkempt drug-affected man holding up a cardboard sign in the centre of Bourke Street represents a very small percentage of people experiencing homelessness, only 4-6% of people sleep on the streets.  Homelessness can take many forms including sleeping on friends’ couches and sleeping in cars, situations that aren’t necessarily visible and can arise through a variety of circumstances such as mental and physical health, unemployment, and the rising cost of housing:

“Homelessness does not discriminate, not everyone is blessed with supportive family and save for a change in circumstance, that could be any one of us sitting on the street.”

Testament to the fact that homelessness does not discriminate, males and females are equally affected (49% are female). Given that domestic violence is the number one reason women experience homelessness, it is important to understand that reducing homelessness is not as simple as building more properties:

“I have a friend who was given a room in a Footscray boarding house, but he was struggling with mental illness and couldn’t deal with the silence. Often living on the streets is a safer prospect than a boarding house where you are in control of very little.”

Warren believes we need to approach the increasing incidence of homelessness by first targeting the incidence of domestic violence and providing access to psychiatric, counselling or health services.  We can start by lobbying local state and federal governments.

In 2018, 300 Blankets, opened Soul Kitchen, a location-based service in Braybrook and Preston, suburbs where there is a high need for social services. Often families who are struggling financially will skip a meal in order to pay bills and Soul Kitchen sees 20-25 volunteers donating their time each Sunday night to providing a three-course meal in a safe and loving environment:

“It’s not us and them, we all sit down together, we encourage conversations and the development of relationships. Some people have made friends that they meet up with during the week. Six months ago, a Soul Kitchen volunteer spoke to a lady who was sitting alone. Recently this volunteer saw her but couldn’t say hello, because she was too busy hugging all her new friends. It is impractical to open my home to everyone, so instead I’d like to open more Soul Kitchens.” 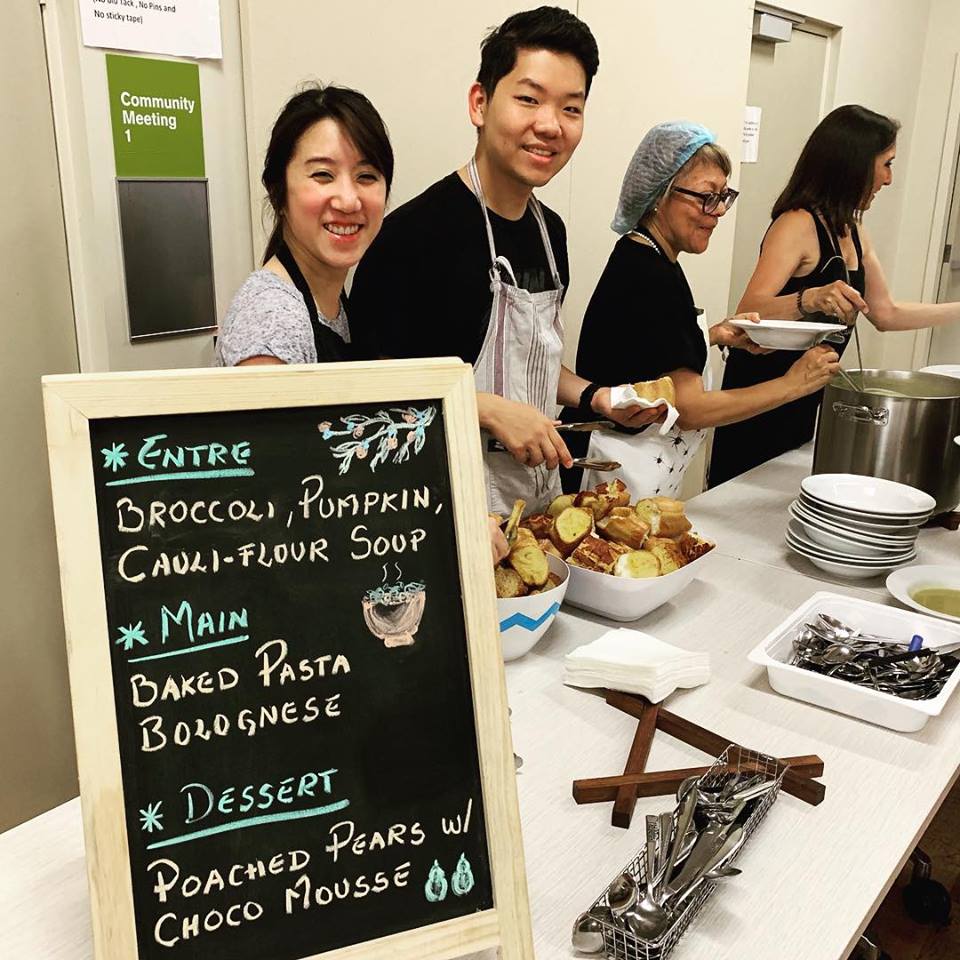 300 Blankets is a 100% volunteeer organisation:

“Volunteers come up to me all the time and say: ‘I feel like I’m getting more out of it than I could ever give.’ Our volunteers give all of their heart to the community, it’s the most beautiful thing and if we all did that we’d live in a much better place.”

Warren exudes the calmness of a man who has found his life purpose:

“I am very driven by faith, and definitely feel that this is where I need to be.”

300 Blankets are always looking for ‘new talent’, particularly to get involved with Soul Kitchen. To volunteer, complete the form on the 300 Blankets website.