““One of my nieces once said to me: ‘How did you put up with such discrimination – a physically inaccessible environment, receiving seventy per cent of a male’s wage,  -and so forth?’, and I said,  ‘We didn’t, and that’s how we changed things’.”

By any measure, systemic disability advocate and consultant Tricia Malowney has fit a lot into her sixty-two years. Having developed polio at four months old,  Tricia’s working life has been defined by her efforts campaigning for gender equality, and social inclusion for people with disabilities.

One of ten children Tricia was brought up in a working-class family:

“At one stage Mum had four kids under five years old, one of whom had a disability. Dad was a shunter (they move trains between yards and platforms)  and he worked his way up without an education, to the role of  assistant yard master.”

In an era when people with disabilities were often segregated, Tricia was never socialised as having a disability:

“A picnic used to be held in Eltham for the shunters and their families. There were races for the children and the adults  placed me a metre away from the finish line, so  that all I had to do was fall over and I would win. Dad would never let me accept the prize, because it wasn’t fair to all the other children. Feeling sorry for me,  all of Dad’s workmates would give me ten shillings and I had to give that back too. Dad always told me: ‘Nothing is for free in this life’ and he always treated me equally.”

The education system during Tricia’s school years required students  to choose between an academic stream and a commercial stream (including typing), neither of which particularly excited Tricia. By her own admission ‘pretty naive’ Tricia left school at sixteen.

In the majority of positions in which she was employed Tricia encountered discrimination or social hardship. When she worked at the bank, women were prohibited from becoming bank tellers, and when she joined the railway she was only permitted to be a clerical assistant and not a clerk:

“I  was promoted up three grades and had three instances of men protesting  against me getting the job,  because an assistant to the engineer was a ‘man’s job’. Other times I was told I had to have passed my HSC, but when I got a position my manager who was a male, had left school in Year Eight.”

Tricia’s mother was eager for her to embark on a solid career path. This led her to live in an Indigenous community in a remote part of the Northern Territory working as a radio operator for a year:

“The community was run by a Catholic missionary. There were no roads, no phones and no electricity.  I grew up Catholic and was friends with the priests and nuns, but the treatment of the Indigenous people I met while in the Northern Territory was a very confronting experience. That’s when I began my quest towards social justice.”

The first step in Tricia’s pursuit for social justice was joining Victoria Police as a research officer and policy writer:

“I faced a lot of resistance from employees – I wasn’t a police officer, I was a public servant, and I was a female with a disability – and here  I was, an outsider, teaching them about sexual harassment and discrimination. A lot  of people didn’t  believe  they needed the training, but I was in a privileged position, there to alert them to which element of their behaviour was unacceptable.”

Recovered, but still unable to work,  Tricia decided to try her luck at stand-up comedy. She attended ‘Jeez Louise’, a comedy training ground for women, which led to her being booked for a lot of gigs on the disability circuit.

Performing at the ‘Victorian Women with Disabilities Feminist Collective’ AGM, Tricia knew it was there she could make the most significant impact on the lives of women with disabilities. She became the convener after two meetings and entered into a partnership with Women’s Health Victoria to develop an information advocacy service for women with disabilities.

“I developed a reputation; I had a scooter at the time so I was very noticeable at meetings. I would sit up the front and constantly interrupt speakers to ask: ‘How are you factoring women with disabilities in?’. When I heard other people start to ask the same question, that was a sign of great success, because it indicated a recognition from the mainstream that there  was a gap, that there was room for greater inclusion of people with disabilities.”

The Collective reached a point in its development where it needed to move to a more corporate model with a CEO and a board. Keran Howe was appointed the Executive Director of Women with Disabilities Victoria ( WDV), while Tricia became the Inaugural Chairperson and was a member of  the Board for six years.

Indeed, Tricia’s personal experience of disability and witnessing many advances within the disability sector, as well as her involvement in several grassroots campaigns, has made her a much sought-after figure for committees or boards of community organisations. As well as being the Inaugural Chairperson for WDV, Tricia has also served as: 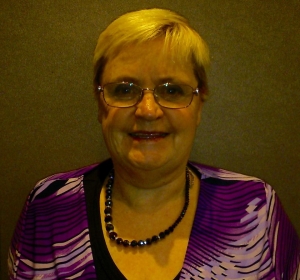 She credits her husband of thirty-six years Noel as her ‘greatest supporter’:

“He ensures that I am able to do what I do by acting as my unpaid support worker.”

“I use the term ‘disability sector’, rather  than ‘disability community’, because we are not homogeneous and it’s OK to disagree. Case in point, Stella Young. Stella was a mate, we can never replace her, but we had some great disagreements as well, particularly around language. I don’t call myself ‘disabled’ and that’s a political statement, I’m only disabled by society’s inability to provide me with the supports I need.I’m a person first, and by using the word ‘disabled’ first, you’re saying ‘I’m broken’ and I’m not. We did a lot of work to try and get rid of that word.”

One of the great privileges we have as Australians is  the freedom to describe ourselves in the way we choose and to engage in the type of activism that suits us:

“I wouldn’t go out and strap myself to the front of a bus, but I have friends who  would! I work my way in and get subversive from the inside. It’s unintentional activism, borne of anger,  (in a nice way)! I respond strongly when I see injustice.”

Tricia completed a joint Anthropology and Criminology degree as a mature-aged student after she was denied access to university in the late 1960’s and  early 1970’s. She is  incredibly proud of the progress made by both the disability and feminist movements but warns care must be taken not to forget the past:

“Feminism has brought us a really long way, and while I’ve met some fantastic people, I don’t think the movement has fully met their obligation to include Women with Disabilities. The disability community has also come very far, especially in the last 20-30 years, but I think in our advocacy we can’t discount the advances we have made,  particularly with respect to de-institutionalisation and acceptance of people with disabilities into mainstream school.”

To demonstrate this progress Tricia references a darker time in the treatment of people with disabilities:

“In my capacity as an advocate, I once visited an institution the smell hit me as soon as I walked in the door, the residents lived in wards, it wasn’t their home; they weren’t allowed to cook meals, had little  freedom of  choice and were treated like children. As a result, they were quite passive people.”

Tricia emphasis that the institution is now closing and that the residents she came to meet through that work are  ‘bright, engaged and beginning to live in the community’.

At the time of this experience it seemed inconceivable to Tricia that the National Disability Insurance Scheme – a funding strategy based on providing people with disabilities choice and control over their supports – would come to exist a few decades later:

“I love the NDIS. Australia’s disability sector has been chronically underfunded for far too long.”

However, it is not yet time for the sector to rest on its laurels. Tricia believes there are two main areas in which inclusion of people with disabilities needs to improve – employment, and access to mainstream services:

“As a matter of principle,  in an environment where others are being paid for the same work,  I cannot work for nothing. I believe in the one in five rule. People with disabilities make up 20% of  the population, so for example,  if a politician were to have five people in their office, at least one should be someone with a disability.”

In response to the  suggestion that the introduction of quotas encourages tokenism, Tricia references her work with Victoria Police:

“I brought in a program in 1998 with Victoria Police  where every person who was hired who was not classed as a police officer would be a person with a disability. As it happens, that program left as soon as I did. However, I met someone twenty years on whom I  had employed under that scheme and he had been promoted three times, on his merit. At the core of that ‘quota’  criticism is the assumption that people with disabilities are lacking in skills, but that’s simply not true.”

Though by no means at the end of her career, Tricia has enough experience in the disability sector to be able to reflect on some personal highlights she has had whilst working as an advocate:

Tricia has also been instrumental in widening the definition of ‘family violence’:

“People with disabilities have recently been included in the family violence legislation, with abuse and neglect now recognised as constituting violence, and carers, both paid and unpaid, recognised as potential perpetrators of violence.”

Tricia aligns herself with the values of humanism,  that is, do the right thing because it’s the right thing, and not because of any particular religious belief.  The majority of people she admires are hard-working women making changes in the disability field, in particular,  ladies such as Stella Young,  Jody Barney, Karleen Plunkett, Mary Wooldridge, Marilyn Beaumont, Keran Howe, Coleen Hartland and Lesley Hall.

She also gives a special mention to her brother Chris:

“We are very alike in our values, and he understands feminism better than most males I know.”

What would Tricia like people to know about social justice and advocacy?

“Leadership comes from ordinary people. I often worry that I haven’t got the time to do everything that needs to be done in the disability space.  It’s up to young people to take up the mantle.”