At twelve years old, while being treated for anorexia nervosa, I confided in my paediatrician I was worried I had too much baggage: “My medical file is huge; I have  Cerebral Palsy, anxiety and anorexia – no one  will love me.” He responded by telling me that his favourite trees are those that sway in the storm and on which you can see the scars but which stay standing, fighting back against adversity.  That was a turning point in my recovery. In 2019 I had the word Resilience tattooed on my left forearm just below an outline of a tree with gnarled branches. I gaze at it regularly as I speak with Hugh van Cuylenberg, Founding Director of The Resilience Project. 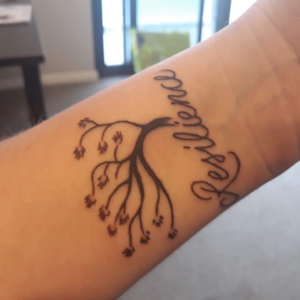 When Hugh was sixteen, his eleven year old sister Georgia also developed anorexia. Meal times which had hitherto been a bonding experience became a time of heightened emotion, with tears and tension:

“My mum and my sister were having one of their nightly arguments over food and I looked around the table and thought for the first time: ‘Gosh Mum and Dad aren’t happy’ and also too my little brother Josh who was twelve at the time. I remember being devastated but also thinking ‘I wonder what makes people happy’.”

As with many people trying to raise the morale of their loved ones, Hugh honed his storytelling ability and comedic timing, skills that would hold him in good stead for his later career as a public speaker.

At age twenty-eight, Hugh accompanied his then-girlfriend Anjali to the Ladakh region of  the Himalayas in the far north of India. The pair, who met at university while studying education, volunteered at a school for underprivileged students. Content with his cricket club and mates in Australia, Hugh was initially reluctant to travel to India, but it was a landmark experience, so much so that he can define his life in terms of pre-India and post-India Hugh. You see, despite sleeping on the floor of mud huts with no running water or electricity,  the Indian people were a community of the happiest people he’d ever met.  Stanzin, Hugh’s favourite student, was one of the most empathetic and made padding for all the doorframes in the school so that Hugh didn’t hit his head. Hugh was also struck by the amount of gratitude students had for basic belongings such as school shoes and basic rusted play equipment. 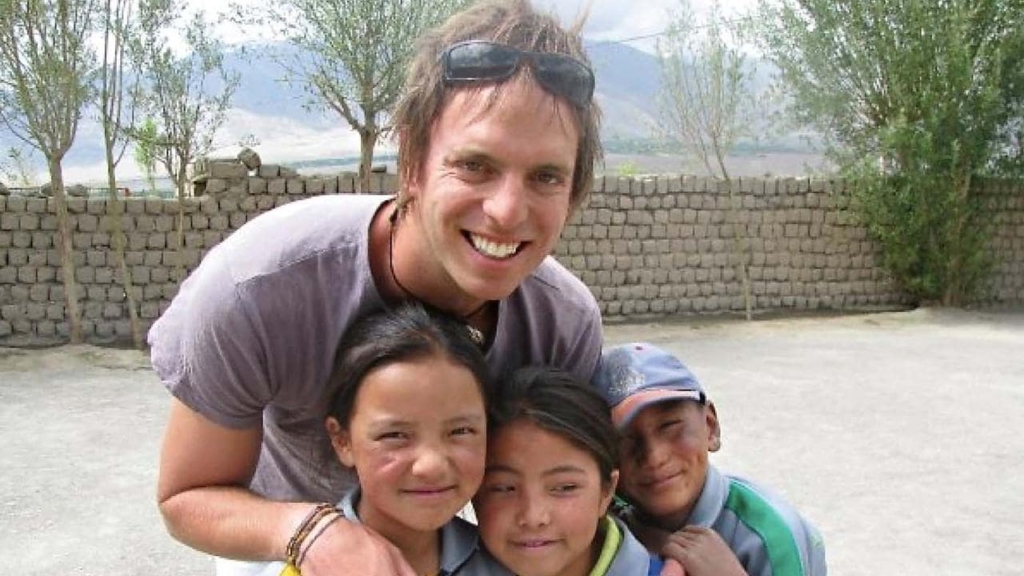 Due to family circumstances, Anjali returned to Melbourne after two weeks. Hugh stayed in India for three and a half months, eager to discover what contributed to the positive attitudes of some of the world’s poorest people. Through his experience with Georgia and the education system, Hugh can attest to the World Health Organisation figures that the Western World are ‘more depressed, less connected, more anxious and more likely to die by suicide than ever before in recorded history’. Upon his return to Australia, Hugh went back to teaching at a privileged school and found that “the kids were massively struggling, with anxiety through the roof.”

In 2010, Hugh began studying his Master of Education at RMIT. At every opportunity, he would focus his assignments around student mental health and wellbeing models. The work of Dr. Martin Seligman was crucial to Hugh’s future calling,  Considered the founder of positive psychology, Dr. Seligman found that humans can retrain our brains to be happier; by writing down three things that go well each day, we begin ‘scanning the world for positives rather than negatives’. Such research gave scientific credibility to what Hugh had known intuitively for years:

“When I was growing up, I used to say all the time ‘Mum, how’s good this?! Without knowing it I was practising gratitude all the time. When I read that when you practise gratitude, you become more optimistic, have more energy, become more focused, decrease levels of anxiety and depression and you flourish, I thought: ‘Wow, that maybe explains why I’ve always been a very happy person.’ “

Through a combination of scientific research and lived experience, Hugh came to understand there are three principles that when practised every day lead to a more resilient worldview: Gratitude, Empathy and Mindfulness (GEM). That is, when hardships come along in our lives, how quickly are we able to bounce back.

According to Hugh’s book ‘The Resilience Project Finding Happiness Through Gratitude Empathy & Mindfulness’ published in 2019, gratitude is ‘the ability to pay attention to what you have, instead of worrying about what you don’t have’, while empathy is ‘the ability to psychologically feel what another person is feeling’ or put yourself in another’s shoes. ‘When you do something kind for someone else, your brain releases oxytocin…allows us to feel joy, happiness and joy’. Mindfulness is ‘taking time to focus solely on the present moment‘. 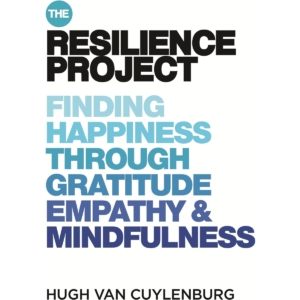 Hugh realised his calling was to share the stories of the children he had met in India and the benefits of GEM. Aware that it was going to be difficult to convey the benefits of meditation to a Western world ,it is important to him that the presentations carried the vibe of an everyday knockaround bloke telling stories down the pub.  When he first became eager to share his message in 2011, it was a tough sell, with no one wanting to take a chance on his inexperience. Yet every time he did a presentation, he felt a great sense of joy, especially when he heard laughter. Often students would approach at the end and thank Hugh for shedding light on their anxiety issue, “I’m going to see a school counsellor now”. Eventually, after being called up at the last minute to present at a conference for school principals Hugh got the encouragement he needed to formalise his message and establish an organisation.  Out of the fifty schools represented at the conference, forty-eight invited Hugh to give a talk about resilience. By 2018, The Resilience Project had worked with over one thousand schools. As a trained teacher, Hugh had seen that motivational speakers often had an intense immediate impact that fades quite quickly. He knew intuitively that for these talks to have a lasting impact, the work needs to be ongoing, so when teachers began asking for accompanying worksheets, a curriculum was developed.

The Resilience Project curriculum has been designed by teachers for teachers.  The evidence-based lesson plans and activities include comprehensive resources and a range of practical activities which suit students from kinder to Year 12. Each year level has thirty lessons divided into four topics: gratitude, empathy, mindfulness and emotional literacy. The education program has been evaluated by the University of Melbourne with six primary schools, and found the benefits were ‘improved confidence and self-esteem, especially in relation to their peer relationships, improved wellbeing and ability to express emotions, improved knowledge and communication of emotions, improved relationships both at school and at home, and more supportive classroom environments‘. There are six education programs: Partnership, Digital, Immersion, GEM, Daily Reflections and Early Years. View the Education Program brochure.

Much of Hugh’s appeal is his relatability and willingness to share his vulnerabilities. As with many of us, the effects of Coronavirus have left him feeling pretty flat:

“At times in 2020, I felt like a phony telling people to be happy when I wasn’t feeling it myself, but I realised it’s important to be open with how you’re traveling and it’s important for me to model that it’s OK to not be OK.

Hugh is very aware of not going out of his lane, he sees his job as getting people excited about their mental health and then pointing them in the direction of professional assistance.

As the father of two young children, Hugh understands it isn’t feasible for people to sit in a room every day, sit with legs crossed and meditate. Instead he suggests incorporating mindfulness into moments – when eating, pay attention to each flavour; when exercising pay close attention to how your body is feeling; when walking the dog, pay attention to what you can hear, surround yourself in nature and awe and find ways to bring it in to every day.

As the organisation grew, people began querying how they could ‘do The Resilience Project’ at home, particularly in families of young children. Thus, TRP@Home was created. It  is a hub of free resources,  strategies, activities and ideas to practice at home. It includes ‘GEM TV: An engaging and energetic video platform focussed on student wellbeing‘, ‘Home Learning: ‘age-specific home-based activities and lesson plans to support school curriculum and family wellbeing’and Home for Everyone: ‘wellbeing tips and ways to build resilience and happiness for yourself, family and housemates’.

As a father of two young children, Hugh is keenly aware of the importance of social connection and worries that social media is taking its place. He encourages people to find a social group such as a sporting club, a drama club or community gathering where they feel loved, validated, have status and a sense of belonging.

In 2019, Hugh teamed up with comedian Ryan Shelton, someone of whom he was a long time fan and launched a mental health podcast ‘The Imperfects’. Teaming up with Hugh’s brother Josh, the podcast involves talking with well-known Australians about their struggles and imperfections, and then discussing the valuable lessons we can  take away and use in our own lives. It is in the top 20 podcasts in Australia, success which Hugh believes is due to its relatability and humorous tone:

“We don’t talk down and there’s no ego. While it’s nice to do the interviews, I’ve found the podcast is as much about Ryan’s journey of discovery, and our evolving friendship.” 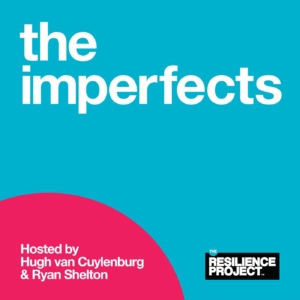 If Hugh ever needs evidence of the breadth of his influence, he need only check his Instagram. He receives at least ten to fifteen messages a day, the general theme of which is that he has changed a life and an outlook forever by voicing the parts of mental health which a lot of people find difficult to talk about.

Talking to Hugh, one gets the distinct impression that the exponential growth and popularity of The Resilience Project was completely unexpected. Now that it has reached this level, Hugh is committed to making the most of it. He is currently investigating different ways to reach people, including making a Netflix special, increasing the organisation’s presence on YouTube and working with big name celebrities to promote the message of resilience.

On his journey, Hugh has come to realise that although we are all worthy of love, belonging, and affection, we tend to tell ourselves that we need to be really good at something and that we have to succeed in order to be worthy:

“Success and love don’t go hand in hand, the second we are born we are worthy. You are worthy of love, affection and belonging, as you are, right now. You don’t need to pretend to be anything or anyone.”