Tragedy struck Dr. Cathy Kezelman almost twenty years ago when her niece Angie died in a car accident. Working as a General Practitioner in Sydney’s Eastern Suburbs, Cathy thought she had a comprehensive understanding of grief. However this untimely death triggered previously buried memories and emotions to surface in her conscious mind:

“I started having panic attacks and sank into a deep depression.  After two decades, I had to leave medicine, because I wasn’t functioning. At the time I thought I was going mad; my medical training didn’t help.”

A survivor of childhood emotional and sexual abuse, Cathy began experiencing flashbacks where she was reliving fragments of what had happened to her. She had no concept of time and would re-live the sensations and the fear  without any understanding of what was happening to her. She also had dreams of being chased through the jungle as a young girl and another of being injured by a circular saw. She was unable to develop a sense of safety, confidence or even a sense of self.Years later, working alongside a therapist, Cathy learnt that such dreams and visions were the brain’s way of making sense of the repressed memories of the abuse she had suffered at the hands of her father and a family friend.

Cathy became very unwell, she was virtually bed-bound and began having suicidal ideation. She was married with four children, she retreated into herself and everyone else ceased to exist.  She became detached from reality and suffered crowding of thoughts, describing it as analogous to having a marketplace in her head. She believes dissociation has been sensationalised in the media, but at the core it is an amazing defence mechanism to prevent the psyche from becoming overwhelmed.

In her speaker paper ‘The Upside of Down’ from the 2012 Happiness and its Causes conference, Cathy describes having ‘lots of strange out of body experiences’:

“…parts of myself  [were] disappearing, my mind [was] not feeling like my own, and myself or the world around me  [was] feeling unreal. Most terrifying was the day in therapy during which one of my parts spoke out aloud for the first time. My mouth would switch between different voices. I never knew what to expect until the words came out. To cope with my trauma I had compartmentalised my essence, creating different child parts. Over many months all of the parts introduced themselves. Some parts were suspicious, others angry and hurt and the road to them accepting one another and to me accepting them all, was fraught with resentments, fear and aversion.”

Working as a doctor gave Cathy an identity which she wouldn’t otherwise have had. Her road to recovery began when she started writing a book, published as Innocence Revisited: A Tale in Parts in 2010. Having her recovered memories written down on paper helped her to digest and make sense of her experiences, as much as she could. Developing a narrative helped Cathy integrate the different parts of herself – she has always had difficulty with determining chronology. 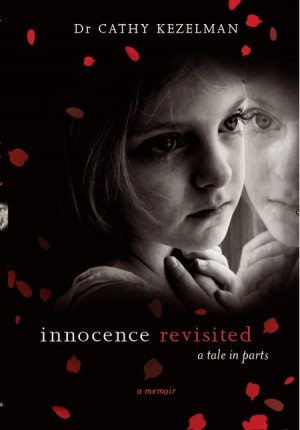 Innocence Revisited: A Tale in Parts

“My therapist walked alongside me – she was available relatively unconditionally, she validated the way I felt, she not only heard but listened to me, and over time my story evolved. It took me a long time to trust anyone, but she provided a safe supportive space where the unthinkable could be thought about and the unspeakable could be spoken. There were no mechanisms used other than the memories themselves, but she helped me re-connect with my family.”

During her period of recovery Cathy began reading every book she could find in the library around psychology and trauma. This research led to her involvement in Adults Surviving Child Abuse (ASCA). Although the organisation was fledgling at the time, it provided a place for survivors to belong:

“You can often feel like an absolute alien, so it was invaluable to learn that although I was terrified, I wasn’t mad. Indeed the way I’d survived made total sense in the context of the trauma.”

Volunteering for close to a decade until the organisation could afford to support paid roles, Cathy took up leadership roles in ASCA for the past twelve years. She became president of ASCA in February 2012. In the same year ASCA was renamed The Blue Knot foundation for two main reasons: to broaden the community to those who have experienced all forms of trauma  and to symbolise the intricacies of childhood trauma. In addition, blue is a calming colour which symbolises the opportunity for recovery and a new lease on life:

“We wanted to embody more than just surviving – it’s about recovery and resilience.”

The Blue Knot Foundation supports the 1 in 4 Australian survivors of childhood trauma. It provides information and resources

The government-funded helpline is perhaps the most unique feature of the organisation:

We have found there is a lack of specific understanding from generic helplines, despite their best intentions. One phone call with the right person who understood, changed my life.”

Since early 2013 a Royal Commission has been held into Institutional Responses to Child Sexual Abuse. The investigation has looked into why the system has failed to protect children in public, private and non-government organisations from abuse. As part of this enquiry over 7,000 victims of institutionalised sexual abuse have told their story to a commissioner:

“People who have these experiences need to be acknowledged for their strength and resilience in surviving.”

In 2015 The Royal Commission released a consultation report into redress and civil litigation for survivors, in which it was estimated that a redress scheme would cost $4.37 billion. These funds would go toward improving psychological and counselling services for survivors and financial compensation for survivors. If requested, survivors would also receive a response from the institution responsible   Read the report and recommendations for justice here. The Commonwealth Redress Scheme is an ‘opt-in’ proposal for all states and territories, and non-government organisations and charities will be later invited to join the scheme. The Federal Government pledged $33.4 million in the 2017 – 2018 budget to establishing the scheme, which will last approximately a decade from 1st July  2018.  In December 2017 the Royal Commission will publish a final report exploring the nature and consequences of abuse in institution, strategies to better protect children from experiencing abuse and the importance of education and advocacy. In addition, the Commission will make recommendations on how to improve the safety of institutions and treatment for survivors of abuse, and improve their opportunities for justice.

Cathy says the establishment of a Royal Commission, and in turn more conversation around family violence and sexual abuse, has encouraged more survivors of abuse to come out of the shadows to courageously share their experiences:

“The Royal Commission has changed the landscape not just in this country but globally. However this the positive legacy needs to grow and flourish; we need to see ongoing changes to legislation, to improving survivor support, justice, and child safe organisations. The Commonwealth Government is certainly showing leadership with the scheme but it’s a work in progress, not the be-all and end-all. In fact, the stories the Commission has heard in the private sessions are the tip of the iceberg. Those involved in telling their story to the Commission have found it an empowering  and validating experience. These people have put their heart and soul on the line and so understandably, they have a lot of expectation around systemic change.”

Educating the wider community about the reality of abuse is one of the most important determinants of positive outcomes for survivors:

“All humans should be trauma informed; the media tends to sensationalise abuse and focus on worst cases, which can cause shame and silence victims. Therefore, it is critically important to educate people about the  long term impact of abuse, how to talk to people who disclose  their experience of abuse, and how to access pathways to support.”

Training around the impact of abuse needs to be improved within the legal and justice sector, and the medical community, particularly for General Practitioners. In addition, the Government needs to invest more in training for those working directly with survivors. Often this trauma is inflated with Post Traumatic Stress Disorder, so it is critical that survivors are made to feel safe, and are assisted to regulate their anxiety and emotions. Access to appropriate services is essential because people can recover from this disabling condition.

On Australia Day 2015 Dr Cathy Kezelman was awarded a Member of the Order (AM) of Australia for her services to mental health. While she is deeply honoured by the recognition, for Cathy the key driver is recognition of the cause:

“The AM helps me open doors and be listened to. My aim is to keep the issue of childhood trauma on  the national agenda.”

If you are a survivor of childhood trauma or abuse, please reach out. Contact the Blue Knot Helpline on 1300 657 380 or visit https://www.blueknot.org.au