“Sometimes the biggest challenge is people’s perceptions of disability.”

Dave Jacka was four days short of his twentieth birthday when a motorcycle accident left him with C5 complete spinal cord quadriplegia and 6% physical function. He was paralysed from the armpits down, with limited arm function (biceps but no triceps),  no use of his fingers and inability to regulate his body temperature. As an active teen who enjoyed football, surfing and skiing, there were days when he wondered what his future would hold – would he watch television on the couch all day waiting for family to come home and help him to bed? When adjusting to using a wheelchair, what helped Dave both physically and emotionally was focussing on one goal at a time. When frustration got the better of him, he waits a day or two and then approaches the problem with a refreshed perspective. It was this perseverance that helped Dave learn how to transfer into bed just over two years after coming home post his accident. Learning to transfer was a turning point for Dave in terms of his view and attitude towards his wheelchair and disability – he felt that he was no longer defined or limited by his disability.

In 1988, at the time of Dave’s accident, “the only sport a person with quadriplegia could do was blow darts”. Wheelchair rugby emerged in the early 1990s with a Come and Try Day at Melbourne Catholic girl’s college Genazzano.  Although the bash, crash, and competitive nature of rugby appealed to Dave, his interest was soon split between rugby and target shooting. He achieved a gold medal at the Oceania Shooting Championships in 1991 before his passion for physicality and team sport drew him back to rugby. He played at a national level before participating in the World Championships in Switzerland  in 1995.  The following year Dave attended the Olympic Games in Atlanta to participate in a rugby demonstration game.

Following his sporting career, Dave who worked as a carpenter before his accident, retrained in engineering and achieved a Graduate Diploma in Project Management. This study aligned with his practical problem-solving creative mindset. At the Avalon Airshow in 2005, Dave was reminded of his childhood dream to fly a plane, a dream which had long since been forgotten: After all, who would teach someone with limited hand function to fly? With his  finely-tuned engineering lens, he envisaged the microlight trike would be most suitable to his abilities because it doesn’t rely on dexterity and would be similar to steering a hand glider. Instructor Steve Ruffles from Eagle School of Microlighting in Bright was willing to collaborate with Dave to help him achieve his goal.

He started with a five-day flight around country New South Wales and Victoria in March 2007.  Plane modifications included:

Dave set his sights on becoming the first person with quadriplegia to fly solo across Australia, a feat he accomplished in 38 days in 2013. He chose to use a Jabiru J230, a 3-axis fixed wing recreational aircraft. It had suitable access to the driver’s seat, appropriate storage for his wheelchair, a minimum cruise speed of 100 knots and a heater (Dave cannot regulate his own body temperature).  Read about Dave’s modifications to the Jabiru aircraft. 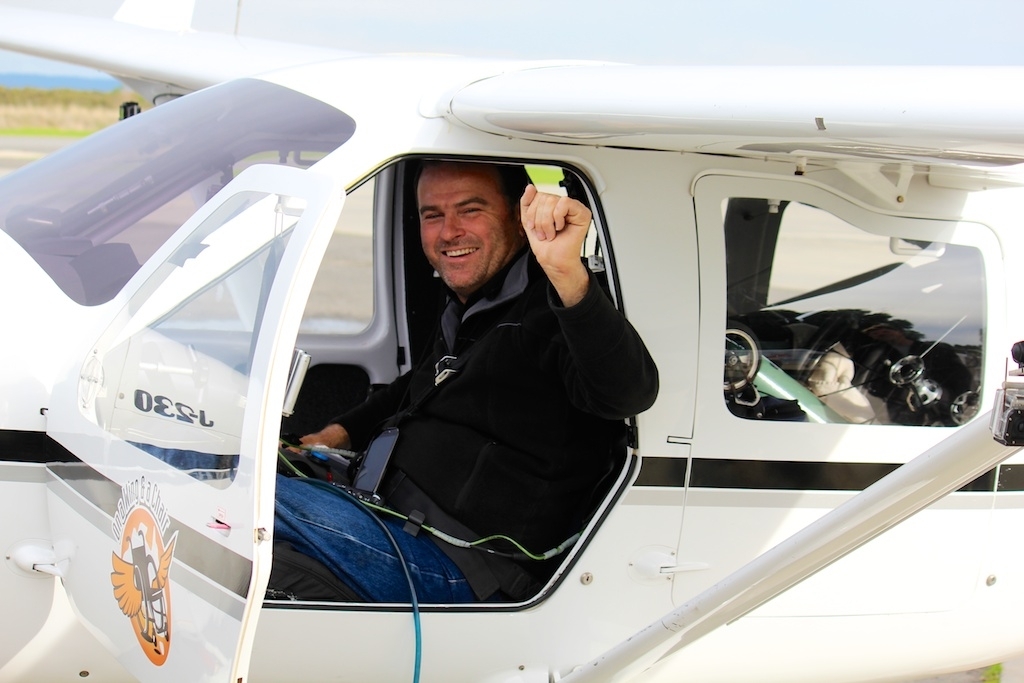 “Flying around Australia was a logistical and mental challenge – I learnt a lot about my limits and how far I can push myself.”

Although Dave was the solo occupant of his aircraft, the journey was made possible by his Support Crew of seven people (four pilots, two carers, and one project coordinator) split across two Support Planes following close behind him. Installed in the plane was a scissor lift so that with assistance from his Support Crew, he could easily board and exit the plane. For Jacka’s solo flight around Australia, he won Victoria’s Pride of Australia Medal for Courage in September 2013. Read Dave’s blogs during his ‘On A Wing and a Chair’ adventure.

In 2014, Dave was a finalist for the Victorian Australian of the Year and was awarded an Order of Australia Medal in 2015 for his contribution to people with disability through sport.

In March 2016, Dave swapped the air for the water as he became the first person with quadriplegia to kayak 2,226 km down the Murray River from Lake Hume near Albury in New South Wales where it enters the sea at Goolwa South Australia. He succeeded after 89 days, which included  ‘the support boats hitting snags, getting bogged on gravel and sand bars, breaking props, almost sinking our punt and equipment, the land crew getting lost’  and unforeseen weather conditions. Read more about the Paddle Wheel Murray River Expedition. Dave uses a Werner Athena paddle because the smaller blade helps him paddle faster, with less stress on his shoulders and less fatigue. Modifications to the kayak included: 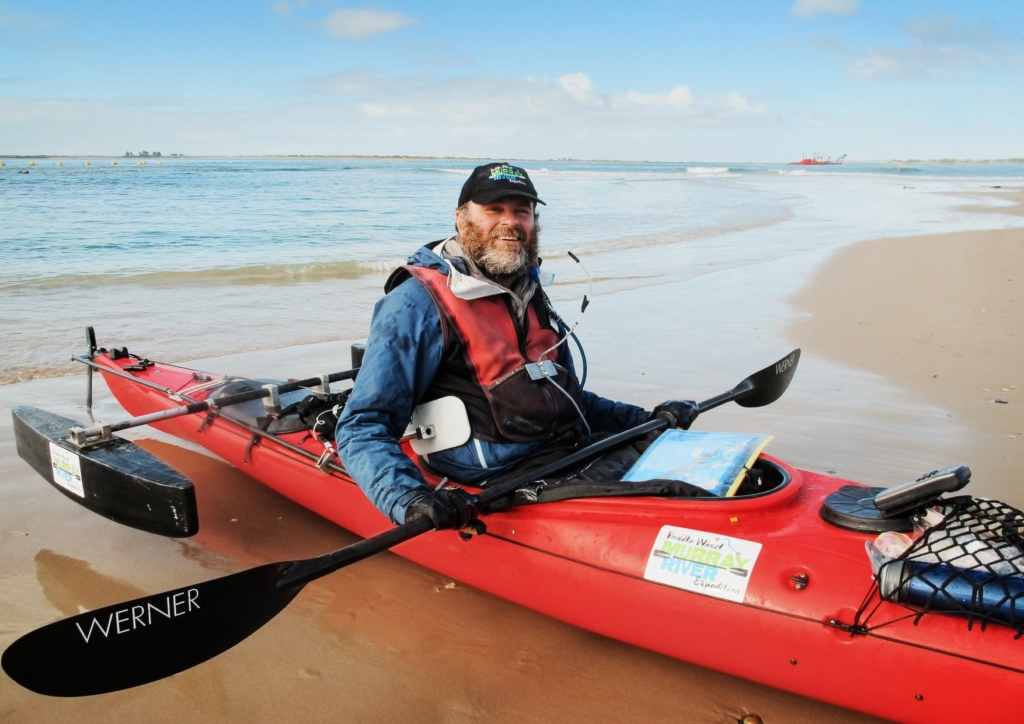 As for his land adventures, in 2019 Dave first handcycled  1000 km from Melbourne to Broken Hill. He retraced part of the Burke & Wills Expedition route that set off from Centenary Park, Victoria, in 1860.  He used a Lasher all terrain Handcycle with power assist and was accompanied by a Support Rider. Watch Dave use his handcycle. Dave uses his handcycle recreationally once or twice a week. 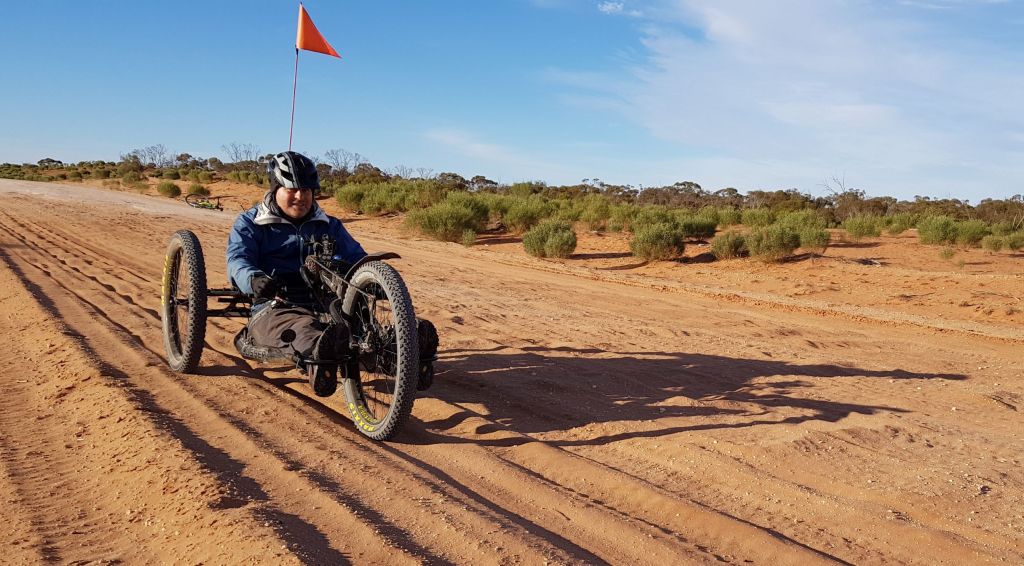 Though an adventurer at heart, the overarching purpose of Dave’s treks is to ‘break down stereotypes and open peoples’ minds to what someone with a disability can achieve… we are all only limited by what we believe we are capable of’.

For adventurers like Dave, having an open mind, perseverance, creativity and the  courage to fail and start again.

Dave would love to fly over to New Zealand and although his support team would never discourage him, there is a worry of engine failure outside Australia.

Dave does not refer to himself as ‘disabled’ because of the skewed view people have of his abilities. In the same way he is not fond of  being  labelled ‘inspirational’  because we all have barriers and obstacles. Despite being a sort-after public speaker through the Australian Quadriplegic Association, Dave does not identify as a professional advocate. Instead, he believes people with disabilities are all advocates simply through being visible in their community.

“If people see us out, we can inadvertently educate people on how to treat people with disability…often people are too afraid to ask questions.”

Dave, who lives with his wife Linda in Melbourne’s North-East self-published his book ‘Six Percent‘ in 2019 with his next book  ‘Honouring the Chair’ due for release in early 2021. 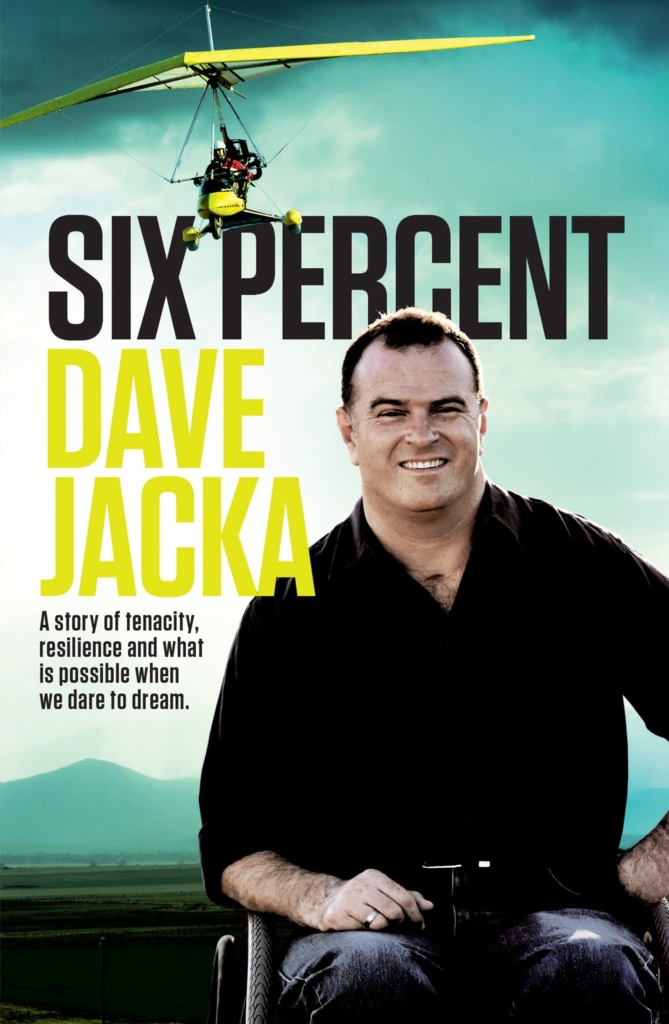 He is assisted by support workers to live the life he wants as independently as possible.