CEO of STREAT Bec Scott describes herself as a “super optimistic angry person fuelled by injustice, prepared to stand up for what is right, even if that means standing alone”. Bec was raised by parents who were very active in the community:

“I was taught that we have a responsibility not just to ourselves but to others, the ‘do unto others as you would like done to you’ mindset.”

Growing up in the tiny town of Kurrajong NSW, it was ingrained in her that the rest of the world doesn’t have the luxuries she took for granted.  Bec first witnessed the truth of these lessons when her father, who earns an income working on international development projects, particularly building hospitals and schools, relocated the family to Vanuatu for three months. During this time, Bec was the recipient of an immense act of generosity which became a defining moment in her life:

“We lived on this really isolated island called Epi in this grass and bamboo hut in the middle of nowhere.  On route we had to go to another island called Tongoa , which was our transit point. The sea was too rough, so the family who had the boat put us up for the night. There was  our family of five and their family of eight, They had a daughter called Merilyn who was sixteen years old like me, so  that night I slept in the room with her and her sisters. When we left, she offered me one of her dresses. She only had two but she kept insisting I take one.  That level of generosity was just astounding to me, a stranger was willing to give me half of everything they owned. With that phenomenal level of generosity something shifted in my mind. I started  thinking about attachment to things, what gives  people happiness and being in the service of others.”

The issue of poverty became more and more noticeable to Bec, a proverbial ‘stone in her shoe’:

“It puts a new lens on everything;  I can’t un-see homelessness. I was angry about it.

Bec reached a turning point; there was a limit to how many times this social issue could be brushed off as somebody else’s responsibility, so Bec asked:’why not me?’ and decided to take charge.

“I’m really stubborn, I’ve never found it hard to motivate myself – it’s always 200% or nothing – a complete dedication.” 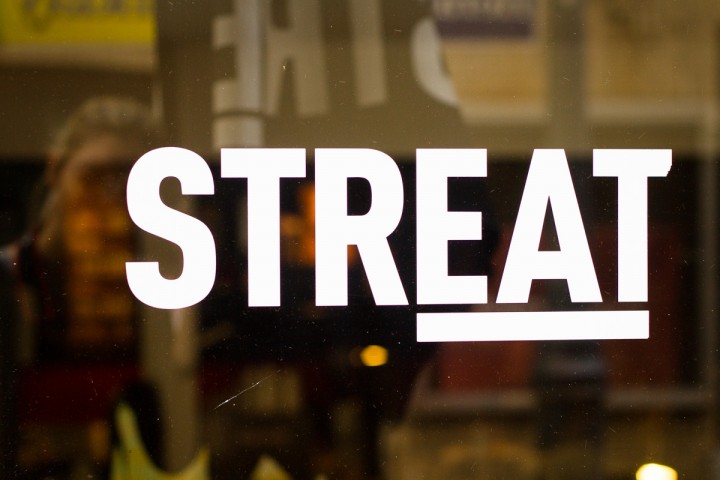 While on annual leave from working as a scientist at the CSIRO, Bec witnessed  the success of KOTO, a charity equipping homeless youth with hospitality skills. Reflecting on the homelessness epidemic in Melbourne and using her strong scientific brain, Bec dedicated herself to understanding the research and evidence around which models are successfully combating homelessness. After volunteering at KOTO for two years, Bec along with her partner psychologist Kate Barille decided to establish a social enterprise, a business model she believed could address the issue long-term and be financially viable and sustainable. STREAT began as a food cart in Melbourne’s Federation Square, later evolving into a coffee cart located in Melbourne Central. STREAT then bought The Social Roasting Company in 2012, significantly helped by two businessmen and philanthropists Geoff Harris and Derek Upton. Harris, a Melbourne businessman who founded Flight Centre bought the land in Cromwell Street Collingwood and gifted it to the STREAT team for fifty years.

The Cromwell venue is a training academy, complete with a roastery, artisan bakery, cafe, production kitchen and catering company. Trainees are involved with STREAT for up to six months improving on three aspects of their life ; they build up life skills with the STREAT Youth team, undertake a TAFE qualification and then gain experience by working in the business as a trained  waitress, chef, baker or barista:

“Homeless doesn’t just rob you of accommodation, it robs you of dignity, human connection, confidence and purpose.”

STREAT works to restore this dignity:

“For so many of our people just having the confidence to be front of house is huge. The customers don’t make assumptions because our model does not encourage guilt or pity. I want customers to view their waitress as another human being, a girl doing the best she can with her life. I want her to feel proud, and finally  worthy of eye contact. It  should be a completely dignified interaction.”

“Domestic violence is the most likely way as a woman you’re likely to die in Australia at the hands of an intimate partner. If the streets are a better option, imagine what home is like.

Although there are certainly people living on the streets as a result of bad decisions, the majority are struggling as a result of childhood circumstances over which they have no control:

Homelessness is traditionally viewed as a housing issue; Bec recognises this is a narrow definition and has caused the assistance offered to homeless people to be very fragmented. For example, a homeless person is often working with one agency to deal with mental health issues, another to deal with drug and alcohol issues  and yet another to navigate the justice system:

“A lot of people on the streets have mental health issues but 80% of those people developed those conditions after becoming homeless.”

While many people would become overwhelmed and discouraged by the enormity of Australia’s homelessness, Bec was excited to tackle the issue in a practical way:

“I love not knowing the answers, one of my favourite states of mind is ambiguity or uncertainty. It’s a little thrill-seeking when the problem is so big or hard that I just think “How the hell would you fix that thing?”The more complex it is…it’s like a red rag to a bull for me.”

When STREAT was first established, the revenue was really small and relied on grants being written by Bec herself. Although she still writes many of those grants, the organisation has now grown to have 70% of their revenue coming through the businesses:

“The holy grail is to be independent and not at the mercy of government grants because that’s precarious. You’re trying to raise funds for business operations bur then also trying to scale to grow bigger but every bit of scaling needs capital as well, so you have your business money and growth money. We’ve had  thirteen different sources of funding,  from crowd funding to equity investment to government grants to in-kind and bartered. We’ve had to get creative to survive.”

Regardless of how successful STREAT has become, Bec won’t rest while there are still people living on the streets:

“The Cromwell venue will help 365 people each year but there’s tens of thousands on our doorstep in Victoria who need opportunities. The reality for the people we don’t help is they are destined for long-term unemployment, prison or premature death. The average life expectancy for a homeless person in this country is forty-seven, so it’s like a terminal diagnosis.”

Into the future, Bec wants to build new centres and develop new training and work opportunities. Bec is always on the lookout for money or partners to assist with establishing training academies:

“There’s hardly a profession or person that we couldn’t develop their skills or resources to help us do more great things.”

Several success stories have arisen from the ongoing work of STREAT:

“A participant of our organisation suffered such bad anxiety he couldn’t come to work; now he is blossoming,  he has worked in hospitality and is  going on an overseas trip.”

“It’s easy to  appreciate finding a bargain, but we need to remember, it’s not a bargain for someone else.  We have an obligation to understand the good and the bad that we’re doing through our purchases. We as consumers have the ultimate power, so at a minimum we should pledge never to do any harm through our purchases, and also to maximise the good. Your dollar is never just buying the item; we all need to gather information so that the supply chain is not invisible.”

For people wishing to be more conscientious about their purchases, Bec recommends Slavery Footprint, a website which calculates how many slaves work to support your individual lifestyle.

Aligning with her efforts to be an ethical consumer, Bec ensures that all her projects are centred around minimising her environmental footprint, while maximising her social footprint:

“I want to reduce waste in the world and be environmentally sustainable . I love hunting for treasures with my son in hard rubbish. The way we are  discarding valuable items echoes the way society tends to discard homeless people. Hence why it is important to me that the cafe furniture at STREAT has been recycled and refurbished. It is a metaphor.”

A creative spirit at heart, Bec is able to recharge by retreating into her art studio. At any given time, she is working on two to five collaborative side projects with other artistic people:

“I enjoy working with highly creative social enterpreneurs who are not deterred by anything.”

She draws her inspiration from people who grapple with complex problems on a grand scale and have the audacity and determination to change the world. She looks up to individuals such as Muhammad Yunus, a social entrepreneur from Bangladesh who won the Nobel Prize for founding the Grameen Bank, and organisations such as The Enchanted Farm,  which aims to pull people out of poverty in the Philippines.

Bec believes that in changing the world we have to work at both the big and little scale, remembering to connect with individuals and local communities.

At its core, STREAT is a kindness enterprise:

“Our currency is kindness and it makes my heart sing.”

You can support STREAT by donating or visiting one of their cafes. Click here for a list of STREAT venues.