Primatologist, zoologist and founder of The Orangutan Project Leif Cocks believes it arrogant to assume that only homosapiens  have achieved personhood in the animal kingdom. That is to say, all the great apes (orangutans, chimpanzees, gorillas and bonobos) as well as elephants, are able to become self-aware, develop theory of mind and percieve themselves and others as independent conscious beings.

Leif has a bond and shared trust with orangutans rarely witnessed even amongst zooologists. Indeed, he is believed to be the first to release a zoo-born orangutan (14-year-old Tamara) into a reserve in Sumatra:

“One of the most magical moments I had was I took an orangutan back to the wild. I was at her birth and looked after her mother and then when she was at the natural age where she would start leaving her mother, I took her back to the rainforest in Sumatra that we were funding the protection of and I helped her through that process of learning how to be an orangutan and surviving in the forest and then after three years of being in the wild, I found her in the forest and we held hands and connected to each other as free equal persons.”

Mr Cocks proposes that these animals deserve the same compassion, protection and freedom as we give to persons from the homosapien species. Established in 1998, the rationale behind The Orangutan Project was that through protecting and saving the orangutans in its rainforest home, they become the umbrella species, and therefore through saving their habitat, all the other species should be saved automatically. While this was true for most, there were two species falling out from under the umbrella: elephants (humans and elephants are killing each other trying to survive in the scraps of rain forest left by the multinationals) and tigers (targeted by humans for poaching).

Multinational corporations are destroying rainforests “simply for the value of the trees and they will plant whatever unsustainable form of monoculture that will give them the most profit”. This destruction of habit combined with orangutans being the slowest reproducing species in the world means they are vulnerable to extinction. Saving these animals involves “an eclectic mix of activities designed to solve the problem in every ecosystem”.

“The Orangutan Project either leases land, purchases or has a memorandum of understanding to protect land and then we have a wildlife protection unit to protect the forest from illegal encroachment and protect animals including orangutans from poaching. We work with a variety of partners changing value status of land from unprotected to protected. In areas that we can’t protect, we fund teams to go out and rescue orangutans to be given veterinary care and then rehabilitated and released back into the wild in areas we are now protecting.”

Leif was inspired by his lecturer at Curtin University George Newlan who inspired me to look at human evolution and great apes, and his former boss at the zoo Reg Gates, who taught him how to start up develop Non Government Organisations. The Project’s objective is to:

“…save five to eight complete functioning ecosystems of the right type, size and shape of forest to take the orangutans and other species through the extinction crisis. We’re piecing those together through different purchases, leasings and reforestations and the urgency is, we’ve only got the next ten years to do this because after that, there’s not going to be enough to piece together. Although we may have orangutans and elephants for some time, they’ll eventually go extinct, so it’s really on our watch that we work as hard as we can to save these ecosystems.  It is achievable, we have the business plan and management plan to make it happen. ”

Leif and his team also work on an international tiger project to protect the Sumatran tiger of which there are 300 left in the wild, and an international elephant project. The Elephant Project website explains that due to deforestation and therefore loss of habitat, elephants ‘raid food crops, destroy rubber, palm oil and coconut plantations and even more seriously, are increasingly responsible for the destruction of villages and a number of human deaths’. As a means of retaliation, the Indonesian government initially ‘proposed culling the problem elephants by shooting’ but after protests from the public, they agreed to stop the cull.  Instead, they chose to capture and ‘either relocate or domesticate wild elephants’.    The organisation only focuses on orangutans, Sumatran tigers and elephants to ensure they remain effective in saving vital ecosystems: “This is the cause where we’re most suitable to make a meaningful change.”

Leif asserts that humans need two things to affect meaningful change in the world, our heart and our intellect:

“We need to care, but indiscriminate charity causes more problems then it solves, so we also need to have understanding…if we don’t think through the process carefully, we can put in a lot of effort with not much gain.”

Leif believes this may be the case with the current emphasis on reducing palmoil:

“There is nothing wrong with people wanting to make companies who are producing palmoil less destructive, but I think linking it to saving the rainforest  is a tenuous link. I certainly would be sceptical of sustainable  palmoil because all monocultures are unsustainable, that’s how nature works. We may naturally assume that if we stop using palmoil, we stop the destruction caused by planations. However I don’t believe this is true because the multinationals will destroy simply for the value. Unless you are addressing the protection of the forest directly, you’re unlikely to have any effect.”

It is important to do some homework in order to make the right decision and support the right charity. While individual acts are important to maintain personal integrity, Leif believes “we need to collectivise to make meaningful difference”, for example, this could take the form of a union. Similarly, ensuring the success of The Orangutan Project  is team of talented, hardworking people: “I believe if we do good work, we attract good people. ”

Although conservation can sometimes feel like “a marathon with a hurdle every two metres and a brick wall every ten metres“, one of the striking elements of Leif ‘s personality is his optimism:

“The wonderful thing is, it’s really not the wildlife versus people, environment versus economy – we’re developing agriculture under the rainforest that we’re protecting. That’s a win-win solution for local communities, indigenous communities as well as wildlife – we’re moving to a place where all benefit. We have a very bright future of bringing local communities, on board for mutual benefit.”

There are companies with ulterior motives:

“What we can’t help is the big multinationals who seek to destroy the environment for short-term gain. Their model is exploitative – they pass the true cost of production onto  future generations through global warming, local communities losing environment services and wildlife.”

However Leif warns against thinking of those working with seemingly immoral intentions as ‘other’:

“The West is directly complicit so to characterise the people as other that we need to educate is a misconception. We are an integral part of both the problem and the solution.”

Doing the right thing can benefit all:

“We can create a world that even will make [multinationals] happier, although they may not ever see it. Every orangutan, elephant and indigenous community whose forest is not destroyed along the way makes our work worthwhile.”

While for some the impact of climate change seems insurmountable, Leif says finding inner peace has helped him continue to work towards a better world for all persons:

“We can’t reform the world without reforming ourselves. With hope naturally comes despair and it wears you out… but if you find happiness within yourself, you naturally want to express it. When you find how to express it intelligently, you’re full of boundless energy and want to express your love for your fellow being.”

For we all have a moral responsibility to future generations:

“Our current wealth is borrowed from our grandchildren because we’re living an unsustainable lifestyle, so if we put a little bit of the money we gain from that privilege back into meaningful action we can at least live a morally neutral life.Within twenty years,  we should be able to hand over functioning ecosystems that will allow the species to survive, to the next generation.”

How do we support The Orangutan Project in practical ways:

“If you are money rich and time poor, we appreciate donations. We can make a meaningful change on your behalf and report back to you via our newsletter and website. If you are money poor  and time rich, you can help by  contacting the representatives in regional areas. You can hold stalls at markets, hostand movie nights and quiz nights and become advocates.”

Government policy needs to change  to be more environmentally effective,:

The message of Leif’s work is to ‘Love all beings equally.’ 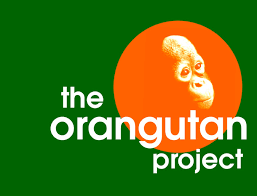 Find out more about The Orangutan Project by visiting their website.