There is one question that strikes all  visitors to 100 Story Building in Footscray: ‘Where are the other 99 floors?’ Seeing the confusion wash over their faces, co-founder Lachlann Carter points out the trapdoor between overflowing bookshelves, supposedly hiding the rest of the venue. The inhabitants of each floor are completely up to the imagination – there may be an angry witch living on the 2nd floor or a washed-up pirate on the 20th floor – these characters often leave messages for children to read upon their morning arrival.

“I used to hate writing, now I love writing and I want to be an author.”

This feedback was given by a previously disengaged student after attending a program through 100 Story Building. Such is the impact of this social enterprise.

In 2007, Lachlann was studying teaching. When, as a requirement of the course, Lachlann completed school placements in Victoria’s inner west, he witnessed ‘real inequity’ within the educational system:

There was a really diverse range of kids from diverse backgrounds; cultures other than English, or experiences as refugees or asylum seekers. Teachers did not have the resources, the support or the time to meet the needs of each of their individual students.”

Lachlann admits he pursued teaching with the goal of working within an educational space (such as a museum), rather than the classroom. This opinion was confirmed when he saw the challenges that teachers faced.

Lachlann’s partner Jenna Williams had built up a professional network of creative people thanks to her work in the publishing industry, which led them to embark on a mission of providing support to teachers through the use of creative projects.

Cut to Lachlann and Jenna being audience members at Dave Eggers’ keynote speech for the Melbourne Writers Festival. Mr Eggers spoke about establishing a creative writing centre attached to his publishing company. This organisation, 826 Valencia, located in San Francisco is a creative resource centre for students aged six to eighteen years who attend under resourced schools or have experienced difficult upbringings.

Fitting perfectly with the theme of creativity, 826 Valencia is somewhat hidden behind a shopfront selling pirate supplies (appropriate considering Lachlann’s previous job as a pirate on the Polly Woodside!):

“The space that was leased had been zoned for retail, but they didn’t want to sell anything, they wanted to do creative writing work with kids.  Renovating and pulling down the old ceiling and walls,  wooden beams became exposed. Someone walked in one day and said: ‘It looks like a pirate ship’, giving them the idea of selling eyeballs, mops and peg legs.”

The shopfront acted as a ‘creative gateway’ for students, forcing them to abandon their preconceptions about education, and encouraging them to embrace their curiosity and creativity; they are supported to ‘think outside the box’. Class workshops are run during the school day with programs also run after school.

Realising such an organisation was the perfect way to achieve their goal of supporting teachers through the challenges in the Australian classroom, Lachlann and Jen travelled to San Francisco to take part in a three-month internship with 826 Valencia:

“We learnt how they honour the creative process so that it is not longer treated  as this mystifying thing that ONLY writers can do.” 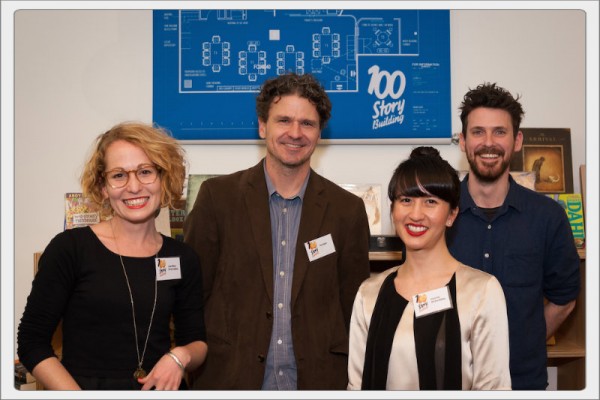 Upon his return, Lachlann took the techniques he had learnt and developed a project for his 2009 placement class called ‘Pigeon Letters’. Every Grade 5 student was paired with a children’s author who became their pen pal. Through the exchange of letters, they collaborated on stories which were then published in a anthology called ‘Pigeon Letters: Stories in the Post’.

“Children learnt the techniques of crafting, drafting and editing a story or comic.”

The difficulty with establishing such an organisation is that the target group, students for whom these projects are beneficial,  are classified as disengaged ‘hard to reach’ children.

“It is a challenge to help students feel like they own the project, so that they take pride in their work.”

Working as a relief teacher, Lachlann shared the stories with other students and distributed work in  various staff rooms. Drawing on the networks they had built through universities, community organisations and councils, Lachlan and Jen ran a three year program with a primary school in Braybrook. A business plan was developed in 2011 and by the time 100 Story Building opened its doors in October 2012, there was already a base of teachers and schools who understood the organisation’s mission and booked in for workshops immediately.

Upon the formal establishment of 100 Story Building, the organisation expanded from conducting discrete projects to one off workshops for class groups, and afternoon programming for individual participants. All staff began as volunteers, yet by early 2013 they had received enough grant funding to work full-time. Three quarters of the organisation is funded by philanthropic grants, with the remaining revenue coming from holiday workshops and professional development days.

After co-founding the space, and later serving as a board member, Jenna Williams stepped away from the organisation in any official capacity in October 2015. Jessica Tran, a volunteer with the Pigeons program since 2009 joined the organisation formally as Development Manager after the end of the first Pigeons project. 100 Story Building has now grown to four permanent staff supporting over 10,000 students from more than sixteen different schools since its creation.

“There is really broad cultural and linguistic diversity amongst our students. We support refugees and asylum seekers, victims of  family violence and people with special  needs, such as students on the Autism Spectrum. Low income them tends to be a common factor across all those groups.”

The 100 Story Building team typically run two programs a day, available to classes of primary and secondary school aged children. A typical day in a school term would be a class group attending a two hour creative writing workshop where students unpack the creative process. They can then participate in a suite of different workshops, including creating comics or  writing ‘choose your own adventure’ stories. Young people can visit with their families after school bonding over creative activities, curling up on a beanbag with a book or writing a story themselves. There are free after school programs including:

A committee of Grade 5 and 6 students collaborate every Saturday on the literary magazine Early Harvest. The group decide on a theme, send out a call for submissions, write feedback letters, commission artists to illustrate and edit, and receive mentoring from industry professionals. Teachers are invited to attend professional development days to build their skills in creative literacy programming.

Some students attend programs every week, others as a once-off. Sadly, Lachlann says he is constantly surprised by the lack of confidence exhibited by students first  visiting the space:

“I always think, ‘Can you not see the potential here?!’ It is heartbreaking at first, but then becomes a challenge.”

When asked about the tangible positive outcomes of the organisation, Lachlann speaks about one particular Grade 4 student:

“There is a student who started as a very quiet, introspective BooWriClu participant, whose mother came to Australia as a refugee. She has been consistently developing in her creative ideas,  creative risks and creative skills. Her confidence is growing all the time. She is now one of the editors of Early Harvest, and a review of a play that she saw  has recently been published on Peril online magazine.”

Although these outcomes cannot be attributed solely to the work of 100 Story Building, there is a definite correlation between the increase in self-confidence, changes in attitudes and student accomplishments, and the support provided by Lachlann and his team.

From the establishment of 100 Story Building,  the team have been happily surprised by support from the creative community who are endlessly generous. Looking to the future, Lachlann says that should there be a knight in shining armour, not only would they provide financial support, they would support schools to employ them to run programs.

100 Story Building has worked very hard on building a sustainable business model, which Lachlann likens to a ‘hub and spoke’ model, with several satellite sites around Melbourne. Lachlann is always looking for pathways through which to increase business opportunities, build community links, and make professional connections. The team are currently partnering with local government organisations to identify the communities most in need of such a space and find a venue in that area.

So keep a lookout. The team of 100 Story Building and the accompanying characters, creativity and magic could be coming soon to a building near you!

If you would like to get involved with 100 Story Building, please email info@100storybuilding.org.au, visit the official Facebook page,  or phone 9044 8215.