Best mates Lucas Patchett and Nic Marchesi begun volunteering with St Vinnie’s Food Van at the age of fifteen. Once they had completed their schooling,their desire to give back to the community was no longer being met and  so they decided to take matters into their own hands, by finding an unique way to improve the lives of others.

In 2014,the Brisbane duo first loaded two washers and two dryers into the back of a van and drove to parks and drop-in centres in their local community. Although their initial mission was to improve the hygiene standards of the homeless, they soon found that conversation was of equal or greater value to the people they met than the washing machines.  For this reason, the vans on shift are also loaded with six foldable orange chairs and fitted with retractable awnings. Orange Sky provides a safe space for 1,500 hours of genuine and non-judgemental conversation per week. These conversations are a constant reminder to Nic and Lucas of the organisation’s purpose, and help to put life in perspective:

“The power, value and importance of conversation cannot be overestimated.” 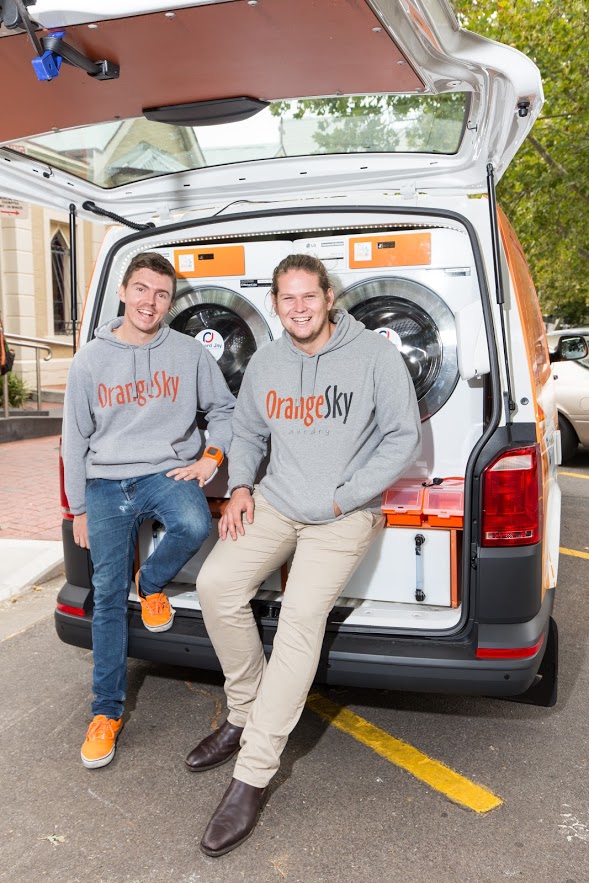 Inspired by lyrics from an Alexi Murdoch song:

“Yes, I had a dream, I stood beneath an orange sky, With my brother and my sister standing by”

Lucas and Nic began working under the name Orange Sky Australia, which is neither politically nor religiously associated. One of the first people they assisted was Jordan:

“The first two times we went out we let him down because the van and the washes broke.The third morning we went out everything worked perfectly.”

“He was eight or nine years older than me, but he had gone to school just up the road from me, we had studied the same thing at the same university; we were on the exact same life trajectory. Yet somehow he found himself sleeping on the streets and doing it really really tough.”

Talking to Jordan about how many people had let him down, Lucas and Nic were determined to be the constant in his life and keep coming back as long as they are needed. Lucas also remembers Nick and Natasha, a couple living on the bank of the Brisbane river in ‘some of the most desolate conditions I’ve seen someone living in in my home town’, and Lizzie from Perth who was kicked out of home at age fifteen and spoke about how difficult it was to feel safe and feel part of a community when people look down on you. Three months after Lizzie became known to Orange Sky she found accommodation. It is a privilege for the Orange Sky team to be trusted with laundry – laundry that may be someone’s only possession.

According to the latest Census, homelessness has increased by fourteen percent and Nic and Lucas have seen the whole spectrum:

“There are currently 115,000 experiencing homelessness and this is often simplified to the ten or fifteen people seen sleeping rough on Collins St that people walk past on your way to work but homelessness is broader than that: it can include couch surfing, hiding in the shadows, sleeping in cars or living in crisis or temporary accommodation.” 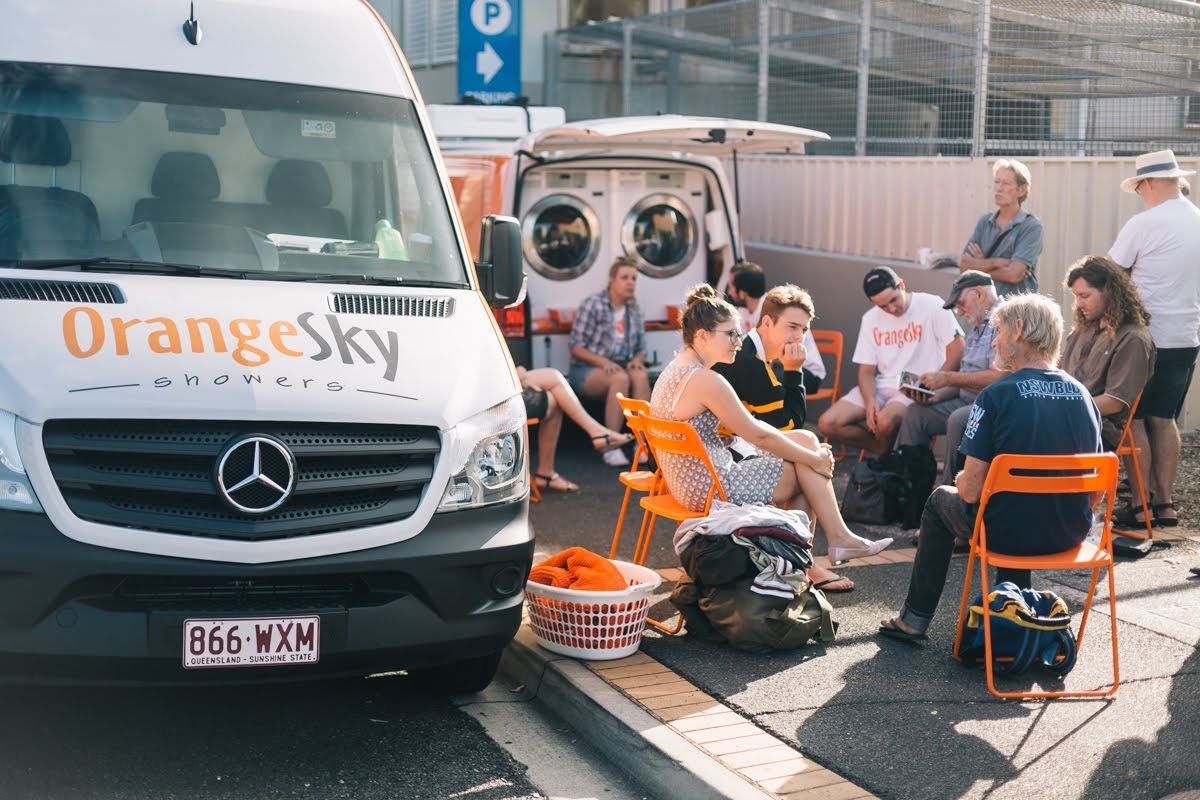 Some friends of Orange Sky Australia chatting in Fortitude Valley

“We believe collaborative partnerships are the best way to support people doing it tough – we acknowledge we don’t have all the answers.”

One such partner is ‘Programmed’, a national labour hire company who provide a 13 week training and employment placement to members of the Orange Sky Australia family. In addition, when vans are not being used, the organisation f0rms partnerships with local companies so that those whom Orange Sky supports can gain four to six hours of paid employment per week.

In  March 2015, Orange Sky expanded into Disaster Relief when they assisted people impacted by Cyclone Marcia in the Rockhampton/Yeppon region. They washed more than 1000 kgs in four days. Then in 2017, when news broke of Tropical Cyclone Debbie, vans arrived in Mackay and during the twelve day stay, over ten tonnes of washing was done:

“For people who lost everything, we were able to restore normalcy through the power of washing clothes and having a chat.”

Orange Sky won the the People’s Choice award through the Google Impact Challenge and recieved $1 million for community projects. This money was used to launch software for nonprofits called Campfire, a platform to assist with volunteer on-boarding,  rostering and managing the organisation.

Orange Sky Australia laid down a challenge to the general public. The ‘Sudsy’ Challenge, named after the first fitted-out laundry van, asked people to wear the same clothes three days in a row and start a conversation about your reasoning. In the three days of this challenge in April 2019, $175,000 was raised. As it costs only $24 to provide someone with a warm shower and one load of clean laundry, this total was able to assist 7,292 people for one month.

Orange Sky was a passion project for three years, but has been generating a full-time income for two years.  Looking to the future, the team hopes to expand from visiting twelve locations a week to sixteen  locations a week as well as expanding their brand in New Zealand. Additionally, Orange Sky Australia hopes to have a presence in remote Indigenous communities with a specific focus on improving health outcomes.

You can join the Orange Sky Australia community by applying to volunteer, donating  or contacting the team. You can also visit their official YouTube channel.

A simple yet immensely valuable way to carry on the work of Orange Sky Australia in your day-to-day life is to have deep and meaningful conversations with those doing it tough.