I have never before conducted an interview which is interrupted by a lamb bleating at the front door. Yet, for as long as Pam Ahern can remember, animals have captured her heart, her head and even her home:

“My mum was a cat lover, we had two cats and a Labrador in our house in suburban Melbourne.”

When Pam was told that her parent’s backyard (and budget!) couldn’t accommodate a pony, she removed the wheels of her scooter, attached her mother’s pantyhose to her scooter to make a saddle and rode it around the kitchen:

“My mum used to say that the worst thing you can say to Pam is ‘you can’t’ and it wasn’t because I was a naughty or belligerent child, I just loved a challenge and exploring the boundaries.”

Pam’s mother took her to the local pony club to placate her love for horses and that is where her relationship with larger animals began.

For three decades Pam was a successful equestrian – she won several awards at Royal Shows around Australia including the Royal Melbourne Show’s Garryowen Trophy twice and was once named Australian Champion Rider of the Year.

Pam has always had a strong sense of justice and a great love of the natural world, qualities for which she credits her father, a religious man of great integrity. It was a natural progression then, that Pam became a strong advocate for animal rights; she attended anti-fur rallies and along with her mother, became a foster carer for lost and abandoned cats and dogs. It was at one of these rallies in the 1980s that someone first recommended Pam read ‘Animal Liberation’ by bioethicist and philosopher Peter Singer. Singer describes attending a RSPCA meeting and having the disconcerting experience of being served ham sandwiches. This resonated with Pam, who was struck by the question, “Why is the pig any different from the dog? Why eat one and not the other?” Pam has not eaten an animal product since (remember this is at a time when there were very few vegan options!).

In 2003, Pam was working with Animals Australia on the Save Babe Campaign, which was championing the cause of pigs and drawing attention to the barbarity of factory farming. James Cromwell, who played Arthur Hoggett in the 1995 movie Babe was going to participate in publicity shoots by leading a pig up the steps of Parliament House. When Edgar Alan Pig, a Land race/Large White cross piglet was chosen as the ‘poster pig’, Pam was tasked with teaching him to walk on a lead. She was taken aback by the public’s heart-warming response:

“People came from everywhere to see Edgar and his guttural grunt, and I realised he was the best ambassador to change the way people think about farmed animals.” 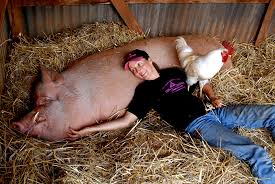 This goodwill inspired Pam to establish Edgar’s Mission, a sanctuary for farmed animals. set on 153 acres just outside of Lancefield in the Macedon Ranges. Pam makes a promise to each animal she cares for: “You are part of the family; I will give you a life worth living and when I can’t I will help you pass peacefully.” Using fast dwindling savings, Pam bought animals from livestock market and through promotion in local media she was soon also approached by people who could no longer care for their animals. The haven now directly cares for approximately 450 animals including Elvis Pigsly, Michelambelo, and Jessica Kitten.

Pam recalls picking up a three-legged Friesian heifer calf and a newborn bobby calf from a dairy farm in north Victoria. Upon stopping for petrol and gazing into the horse float, she saw the new friends huddled up together, looking wide-eyed at the world around them:

“That’s when I decided to name them Hansel and Gretel – they were two little lost children finding their way home.” 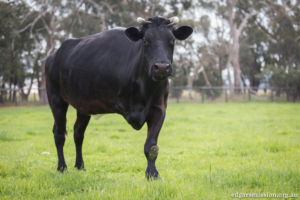 The friends enjoyed ten years living at the sanctuary together before Gretel’s passing earlier this year.

Pam innately believes in the goodness of the human heart:

“We have a responsibility to be a kind and benevolent species to those who don’t have as much power and strength. Animals cherish their bodies and babies just as much as humans do, and it is an admission of ignorance to take from these animals and not expect them to take from us. People have a natural empathy and respect for animals which means that part of our heart shuts down to allow us to do harm to other beings. We see animals as other which justifies doing atrocities to them.”

Believing anger at injustice is largely counterproductive, Pam instead works to ensure that the sanctuary is not just a home for farmed animals, but a setting for advocacy, education, and public outreach:

“I don’t think we as a society are particularly honest with children about what happens to farm animals.

Often you visit a children’s farm and there is a proliferation of baby animals with no explanation of what happens to these vulnerable babies once they are no longer cute little babies.”

Pam suggests we foster kindness by being mindful of our language, our choice of food, fashion, and activities. Making the world more sustainable and kinder for future generations often seems an insurmountable task, as we face climate change, habitat loss, and racism:

“As humans have so much power and every decision we make is a vote for the kind of world we want to live in. We need to heed the wakeup call of Covid-19, and we can do that by thinking of the Serenity Prayer: ‘Grant me the serenity to accept the things I cannot change, the courage to change the things I can, and the wisdom to know the difference. One of the good things about our species is that we can evolve into better versions of ourselves in the next generation.”

“Under the law as it stands, some animals are more equal than others. Farmed animals such as pigs, chicken, cows and sheep are not protected from cruelty, in fact they are excluded from the protection that covers cats and dogs.”

With an endless thirst for knowledge, Pam lives by a quote from American writer Alvin Toffler: ‘The illiterate of the 21st century will not be those who cannot read and write, but those who cannot learn, unlearn, and relearn.” It follows then, that when asked about her heroes, she cites a senior member of the public:

“A member of an Edgar’s Mission tour group took me aside before she got back on the bus and said it was the first time she had understood lambs as individual beings. She was a lady in her eighties who was committed to not eating meat anymore.”

The support shown to the sanctuary is heart-warming to Pam:

“The Dalai Lama once said: ‘If you think you are too small to make a difference, try sleeping with a mosquito.’ We receive bequests, pocket money from kids and donations from people who tell us not to waste money on receipts, it all makes a difference.”

The sanctuary, its staff and its forty to fifty volunteers have been severely affected by COVID-19 and it is closed to the public until late October. Interested parties can still support the organisation through donations either of money or specific supplies such as hay or medication , or through  purchasing official products such as the ‘Cooking With Kindness’ cruelty-free cookbook or the ‘Colour With Kindness’ colouring book through the online shop.

Pam hopes that her passion and attitude towards her fellow being serves as evidence that kindness should transcend borders and species. After all:’If we could live happy and healthy lives without harming others… why wouldn’t we?’