Eighteen years old and preparing to board a plane to Calcutta, Moira Kelly was bemused by the protests of her brothers: “Mum, you’re not really going to let her go, are you? She’s not really going to India.” Of course she was; she had been insistent on taking this journey since first seeing Mother Teresa on television at seven years old:

“I loved Mother Teresa – she was my person when other people had pictures of pop stars or sports stars on their locker.”

Though still young, Moira had a clear vocation: she left school at sixteen to work as a special education assistant and in 1984, as a practising Catholic trained as a lay missionary. Understanding that she could best help others by ‘working in the trenches’ with them, Moira moved to Western Australia and worked as a ‘house mother’ in an Aboriginal missionary.

At twenty-one years old, Moira briefly returned home to sell her car, bought plane tickets and moved to Calcutta. In the spirit of keeping everyone positive and upbeat, she told a completely fabricated story:

“I said: ‘Mum don’t worry, I have a great place to stay, work, and lovely people to come meet me.’ – what my mum didn’t know wouldn’t hurt her. I didn’t know where Mother Teresa was but I just caught a taxi and figured it out! I would never let my kids do it; I was very naive but everything felt right.”

Once in Calcutta, Mother Teresa was a well-known figure, easily located and Moira worked alongside her in an orphanage for two years, caring for ill people or those with disability such as leprosy or those needing urgent medical care such as those with cleft palates. When asked  to describe the saintly figure. Moira is quick to clarify that there are ‘several other Mother Theresa’s in the world, whom we don’t necessarily hear about, who aren’t Catholic:

“She  was the the world’s greatest social worker, with an undeniable aura and the greatest sense of humour. She was surprisingly feisty but she had the purest heart. She was, and still is, my greatest inspiration.”

One of the greatest honours of Moira’s life was to be invited to her beautification in 2003,  and canonisation in 2016.  The Calcutta experience lit a fire in Moira, giving her the energy to continue the work. Yet with an exhausted bank account and expiring VISA, Moira returned to Melbourne after six months to work three jobs and set herself for longer journeys abroad. Upon her return, she was the recipient of several awards including 1986 Victorian Young Achiever of the Year. 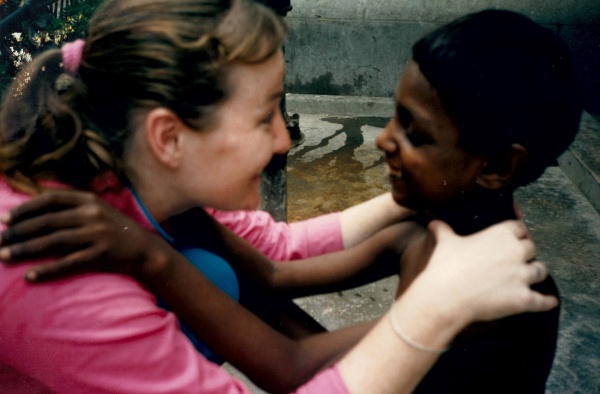 Moira lived for four years in the heart of Bosnia during the Balkans Crisis.  Coming face-to-face with many  desperate mothers whose children required life-saving medical treatment, she was moved to self-fund journeys back to Australia for operations and  a standard of healthcare not available in Bosnia.  In the next ten years, Moira’s compassion saw 120 sick, injured or disabled children brought to Australia for treatment, and others to Austria, Ireland, England, Canada and the United States.

In 1999 on her return to Australia, Moira established the Children First Foundation, and in 2001 on 45 hectares of Kilmore land donated by the Rotary Club and some generous locals, Moira opened the Open Door Rotary Farm, a place where children can recover before returning to their home country. Children were brought to the attention of Moira and her foundation by nurses, aid workers, religious groups, charities and volunteer doctors. Caring for victims of war-torn countries is so much a part of Moira that she admits to having trouble settling back into regular life:

“Seeing wars on the news, I get itchy feet and want to go there, especially when the Iraqi invasion happened.”

While living in Albania and accompanying children to America for treatment, Moira was told of seven-year-old orphan boys Ahmed and Emmanuel from Baghdad. Eighteen months later upon arrival at the orphanage, Moira was greeted by an Arabic song ‘Welcome, Welcome Aunty’. The brothers were found abandoned in a cardboard box; their limbs were deformed due to chemical warfare. Two years on, Moira was able to provide them the family life and love they so craved – she assisted them in leaving the orphanage and formally became their adoptive mother:

“Ahmed and Emmanuel needed me as much as I needed them”.

The brothers have since become household names – Ahmed Kelly is a Paralympic swimmer, currently in Canberra ; his brother Emmanuel Kelly is a talented singer who came to prominence as a contestant on The X Factor.

A twin herself, it seemed like fate that Moira would be closely involved with caring for Bangladeshi twins Trishna and Krishna. Three representatives of the Sisters of Charity found the twins, conjoined at the skull at a Bangladeshi orphanage and through engaging the Children First Foundation, they were brought to The Royal Children’s Hospital in 2009 for marathon operations to separate their blood vessels including one of 32 hours to separate skull and brain tissue.  The twins now live with Moira along with their biological mother Lovely Mallick and younger brother:

“I went into Trissy and Krissy’s journey first as an aid worker, then a nurse, then somewhere along the way, I became their mum. I had to put everything aside and just care for them. The odds were against them – I knew I had to step back from everything to give them the best chance I could.”

Moira cites the twin’s successful separation as a life-changing experience, which caused her to re-assess where she could be of greatest value.

“I took a step back for six months and realised I wanted to be on my own again. I loved to call the shots; I wanted  my work to echo my early days as an aid worker, that’s the essence of who I am.  I felt as if I was being called to help children like them – children put in the ‘too hard basket’- that the world was saying no to, that aren’t a quick fix – people who need more like six years, rather than six weeks or six months of care. Put simply, I don’t have the number of children I once did, but those that I do help need round the clock care.”

One such child is Angel from Pakistan who was born with the rare CLOVES (Congenital, Lipomatous, Overgrowth, Vascular Malformations, Epidermal Nevi and Spinal/Skeletal Anomalies and/or Scoliosis) syndrome. The six year old has size 17 feet, she could hardly walk and was very malnourished. Despite children starting school at three years old in Pakistan, Angel was not permitted an education because it was feared she would be too much of a distraction. When Australian doctors first met Angel, they were shocked at her dangerously low iron level;  indeed it has taken two years, with many visits to the paediatrician and nutritionists, for doctors to deem her healthy enough to have her painful limbs amputated:

“Angel was given the all-clear for surgery four months ago – she  is excited to have prosthetics  like my son Ahmed, and she only wants pink shoes! She’s having surgery at the Royal Children’s Hospital and A Current Affair are following it. She is accepted at kinder with above average intelligence – the kids asked a few questions, but after that went to play together.”

For all her successes, Moira can have frustrating days where bureaucracy is a barrier to her humanitarian work:

“One child should have been in Australia a year ago, and if she’s not here in a few months, I won’t be able to save her sight. The government gave it the go ahead but then the judge wanted one million dollars for security, which is ridiculous. That was overturned a day later, but we’re still on hold for the child. It’s frustrating because she’s in an orphanage, but I’m working with Australian Government officials to help her.”

Moira is no stranger to dark days:

“Recently  a child we were helping didn’t get a good health report, and that’s hard when you love them so much. I’ve got a group of close friends so they came over, I had a cry and a cup of tea in the lounge room, and then they set  about helping me devise a diet for this girl – she has renal failure.”

Stepping away from the Children First Foundation over twelve years ago, Moira was encouraged by friend and CEO of La Porchetta restaurant Sara Pantaleo to establish a foundation in her name. The Moira Kelly Creating Hope Foundation was formed in 2016:

“I love my kids, I’ll always have kids, but now I am able to take on displaced women with their children. What some of these women have been through is horrific, it’s hard to believe they come back to such great health. They often haven’t got  anywhere to go, as a victim of trafficking or domestic violence. We want to provide them with a loving environment where she is able to rest her head on a soft pillow at night knowing that she doesn’t have to worry about when she has to move out. We will help mind her kids and get her back into the workforce or study. Next I want to establish a share-house for women.” 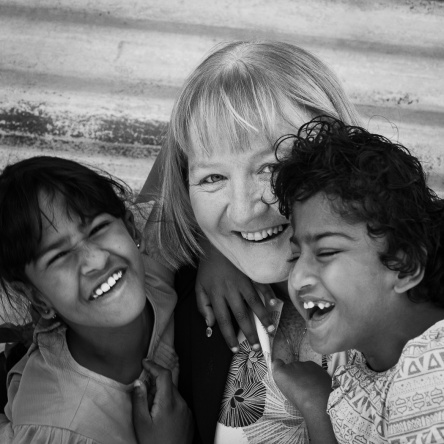 A sought-after public speaker at schools across Victoria, Moira hopes to pass on one key message to the next generation:

“You don’t have a nurse or doctor or social worker, you can be a hairdresser or gardener and still give back to the community; Mother Theresa often said ‘little things in great ways’.”

Named 2012 Victorian of the Year, twice nominated for Australian of the Year and made an Officer of the Order of Australia in 2001, Moira says that while she is honoured to receive the recognition and  it gives her work credibility, she would like there to come a day where the work she is undertaking is no longer considered saintly:

“I often think: ‘Isn’t it a funny world we live in, where what I do is considered extraordinary when it should be normal? All my friends are in service or social justice, and because I surround myself with like-minded people, to me it’s normal.”

Moira’s latest project is Global Gardens of Peace which aims to provide vulnerable and disadvantaged communities with accessible gardens, parks and lush landscapes in which to play, heal, rejuvenate or carry out spiritual practices. The project’s first initiative will be The Garden of Hope in The Gaza Strip. The team hopes it will serve as a symbol of resilience and an antidote to the trauma experienced by nearby residents. In the future, it is hoped that this garden will lead to more opportunities for employment, less pollution, and a greater focus on sustainability. The support from overseas donors and the United Nations Development Programme is very much appreciated, but as an Australian initiative and design, Moira would like to see the Australian Government take the lead on funding the project.

With nineteen people in the house, Moira says her home is full of laughter, fun and healing:

“This work has been exactly what the doctor ordered, my soul is nourished and I’m in a really great place in my life now.”

Moira’s work is heavily reliant on donations. If you can assist, please visit The Moira Kelly Creating Hope Foundation website. You  can also run fundraisers, or  share your talents, whether it be cooking a meal or knitting a blanket. To find out how you can help, please contact the Foundation or e-mail info@creatinghopefoundation.org.au. Everyone can contribute!