On a two-day drive from Nairobi to Lokichoggio with her family, five-year-old Tina Kuek visited the Kakuma refugee camp set up by the United Nations High Commissioner for Refugees (UNHCR). There she saw people who though similar to herself in appearance were living a very different life, and a fire was ignited in her: she was going to work with the UN. While at university she successfully completed a six-month internship with the UN, which led to her being employed as Senior Protection Assistant at UNHCR in Canberra. This experience shaped much of her outlook on life – her work was very multicultural. It was clear to her that the fundamental values and desires of humans are very much aligned.

South Sudanese by heritage, Tina’s family moved to Nigeria when she was two months old. Whilst there they lived in three different cities with three different languages, before migrating to Kenya when Tina was five and settling in Australia when she was nine. Tina’s parents imbued their five children with a sense of social responsibility. Indeed, Tina’s mother who was once stationed in Juba in South Sudan working for the UN did not travel to Australia with her family at first. Upon South Sudan gaining independence in 2011, her mother believed it was the responsibility of those privileged with an education to give back to their country.

Tina completed a Bachelor of Arts majoring in International Relations, a Masters of Applied Anthropology and Participatory Development, a Graduate Certificate of Law and she is pursuing a Master of Public and International Law. Her focus on Participatory Development led her to Indonesia to work on a project with local communities on income-generating activities. Later she worked as a Humanitarian Case Worker with Migrant and Refugee Settlement Services. However, it was an incidental conversation with an Ethiopian taxi driver which first alerted her to an often-ignored issue in the lives of people from migrant or refugee backgrounds.

“The driver was passionate, articulate and confident…he was educated and had worked in the corporate sector back home, he was motivated to do something different but felt like he was stuck driving taxis for a living.”

Last year, while participating in a program run by Leadership Victoria Tina met several people of African backgrounds who had migrated to Australia, most of whom were university educated or had really advanced qualifications but who weren’t working in areas that aligned with their qualifications, experience or areas of interest.

“At my table, there were four other migrants, we were all from African backgrounds, two had PhDs, two had Masters in things like Economics and Public Health that society needs, three of the four had lower level jobs whilst the other was still studying because he couldn’t find a job.”

Curious how widespread underemployment was in the refugee and migrant communities, Tina created a survey for targeting university-educated African migrants covering educational background, length of time residing in Australia, current employment status and place of employment, and the minimum qualifications required for that job.

“I knew going into the survey there would be some underemployment because the job market is competitive for everyone and as migrants you face additional barriers, but what we found was quite alarming: quite a lot of participants had qualifications which well surpassed the requirements of their current role.”

One survey respondent equipped with a degree in applied mathematics was employed in a warehouse while another who had completed a business degree worked in a meat factory. In addition, there was a disproportionate amount of people who had graduated with degrees employed in the aged care sector. Whilst these roles have definite validity and value, Tina was disturbed and saddened to learn that the respondents were only continuing in such roles in order to earn an income whilst trying to secure professional service jobs.

This research aligned with findings by Deloitte (2018) that 49 out of 100 migrants aren’t utilising their skills, and findings by Bright Futures(2017)that migrant and refugee students are 24 percent less likely to find full-time employment in the five years after graduation than students born in Australia.

When Tina asked survey respondents the reason why they may be having trouble, common themes were racial discrimination, lack of Australian networks, and a limited understanding of the Western-style recruitment system.

“Although unconscious bias does contribute to these findings, it’s hard to pinpoint and say there’s only one reason. It would be a big claim for me to say it’s only because of racial discrimination- there are commissions, legislation, and policies to try and reduce that. Racial discrimination is such a big thing that I don’t have the capacity to address, so I just tried to help people put their best foot forward in terms of resume, cover letter, key selection criteria and how we answer the interview questions taking into account cultural nuances. “

After conducting the survey, Tina wrote about the results believing that if she shed light on the issue, someone better placed would read her article and work towards decreasing underemployment of refugees and migrants. However, in late 2018, through word-of-mouth recommendations, Tina was getting a lot of requests to assist people with resumes and their employment search in a one-on-one capacity.

“I was just giving advice based on my own experience but I’m not a professional in Human Resources and I’m not qualified to say with any credibility or authority there is one right way to do things.”

A Senior Policy Officer with the Victorian Government, Tina’s day job involves strengthening the rights of people with disability under the National Disability Insurance Scheme.  With additional responsibilities as an Executive Member of Girl Guides Victoria and a Vice Coordinator at the Youth Action Hub, Tina’s capacity to assist people one-on-one gradually reduced, yet she found it difficult to turn away people asking for help.

“One lady had a flourishing resume with so much experience, which was very relevant and very applicable to jobs you would find here and yet she was really struggling. We worked with her and now she’s employed in the non-profit sector, and when I was able to help her a bell went off: “Maybe there is something we could do to have an impact and make a difference” ‘.

Tina launched Kazi Victoria in early 2019 as a more efficient solution to the underemployment of migrants and refugees. Kazi (a Swahili word meaning ‘work’) Victoria was created as a space to support and facilitate employment trajectories and help improve employment opportunities. The non-profit organisation offers free workshops to people from all cultural backgrounds. Designed for a maximum of thirty people the workshops have three areas of focus:  resume writing, preparing for interviews and building professional networks. Experts, such as representatives from Hays Recruitment, directors of HR and international public speakers are invited to speak and give advice about finding employment. As a new organisation, Tina is open to evolving Kazi Victoria to ensure it addresses gaps present in the recruitment of migrants and refugees – her greatest priority is to ensure the workshops offer practical tools to participants. 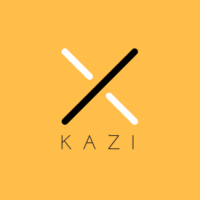 “I have seen resumes with lots of good content – our workshops can help people refine it into a format that, makes it easier for recruiters to choose. We talk about how best to present yourself because the job market is very competitive, and what you stand out as unique can be hard to self-identify.”

Since February, 160 people have registered for the two-hour workshops; Tina puts the positive reception down to three elements: it’s voluntary, participants are motivated, and it is a much-needed service.

Tina is building her profile as an advocate of equal employment opportunities and has spoken at events in that capacity. Yet regardless of her success, as is common for attempting to make their idea a reality, Tina experiences fear and doubts her ability:

“It wasn’t something I planned so I do doubt myself a lot, but I make sure I talk, seek advice, have mentors around me to bounce ideas and encourage me when I’m feeling unsure, and most importantly help me to remember the why.”

‘Remembering the why’ seems quite simple when Tina begins speaking about people who have benefited from Kazi Victoria:

“Someone who had studied in Australia and was working in a factory over a year after graduating is now employed in the finance sector.”

Despite being disappointed that there is still a need for such organisations, Tina hopes Kazi Victoria can continue to provide access to professional networks and close the employment gap experienced by migrants and refugees.